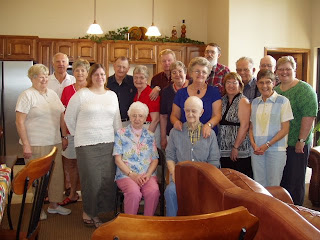 Descendants of Adolph and Greta Swanson met last weekend in Sioux Falls, SD. We were probably the smallest gathering of cousins ever to meet in the name of a Swanson Reunion but there was still time for good food, stories and sharing and a photo or two. 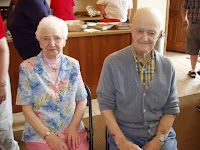 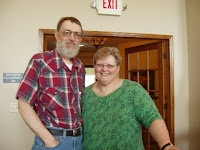 Robert Swanson and I grew up in Grandview Church together as cousins. Sunday School, Confirmation, Young Peoples, Christmas Caroling, Hayrides, Easter Breakfasts, Campouts, etc. It wouldn't be a trip home if I didn't attend Grandview and talk at coffee time with Robert.
Posted by Diane Johnson at 3:13 PM No comments:

Back from the Black Hills

Our quick trip out and back is through. We filled the time we were there by visiting family, friends, and special sites with lots of food thrown in here and there. 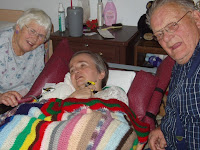 On our first full day there we had to go to the clinic as Mom had a painful reaction in her hand/arm after driving some on the way out. She began and ended the trip driving, and while she wore a brace on her hand when she got to Hill City she had pain shooting up her arm and swollen joints. We went to a clinic in Custer, SD and she got a cortizone shot and he made a form fitting splint on her forearm to emobilize it. 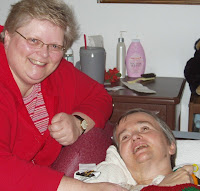 The clinic was near our cousin/niece Linda Ball, we had plans to visit her when we planned the trip, so all worked for the best. Linda will have her 59th birthday next week. She is blind and unable to move, except for one hand, but she recognized our voices and told us some jokes and we shared some stories and a song. We got a kick out of the fact she called Dad, Uncle Kelly. Kelly was what my Grandma called Dad, her Kelly Boy. 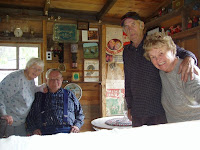 My Aunt Carol and Uncle Wes live south of Hill City on Reno Gulch Road. Here is a photo of Mom and Dad and Carol and Wes in the summer kitchen Wes Built Carol. It has a cook stove and serving window and lots of treasurers.

She has it decorated so cute.
I made a photo and music video about Linda for my Aunt Carol and she in turn made me this quilt in thanks. We just had to cuddle under it to treasure the moment. 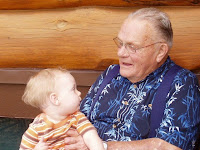 Saturday we went out to my Cousin Bill and his wife Tina's log cabin. They built the cabin entirely themselves and it is really a site to see snuggled back in the hills. The huge logs fit together so tight. We listed to stories again about the building process, truly amazing! 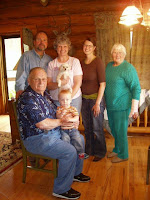 On this trip they also had a grandchild to show off. Riley and his Mom, Kim joined us for a morning of relaxing, reminising and catching up. Riley amazed us all with his sign language skills, ball throwing with the dog and ability to entertain a crowd of adults without too much trouble.
We didn't make it up to the faces on this trip, but a trip to the Hills wouldn't be complete without a visit to the Crazy Horse Monument. 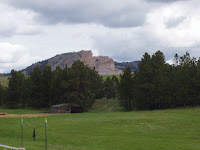 It began 61 years ago by Korczak Ziolkowski. I actually met the man when I went to the monument on the band trip in 1972 and paid him for his autograph on a 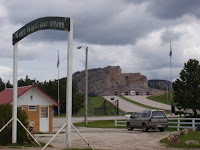 sheet of paper with the poem that is on the smaller carving in the lookout/viewing gallery. So I can say I was hooked at age 13 on the carving...! I'll have to dig out some old photos to compare the progress in the carving. A friend who used to live in Sioux Falls has an antique store across the road from the monument so we had to stop and visit with Boyd too.
Heading to the north end of The Hills, We visited with the Whitcher side of the family. I missed getting my camera in action but we toured Uncle Dales new home and then went to Blackhawk where my Cousin Greg and wife Nancy have a home. We grilled hamburgers and had more treats there with more cousins and generations as well as the Uncles and Aunt Carol.
On the way home we stopped in Mitchell, SD (the home of the world famous Corn Palace) to visit with Friends. This time Diane did almost all of the driving with Dad giving me a little relief in the middle of the trip.
Posted by Diane Johnson at 6:30 PM 1 comment:

Heading Home... and on to The Black Hills

I'm packing the car for a trip home. We're also going to the Black Hills Thursday to spend some time with relatives. It's been a while since I've gone out to The Hills, and we've gone many times over the years. 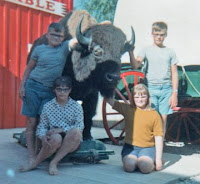 Back in 1967, we stayed at a campground outside Hill City, which ended up being across the road from the place my aunt and uncle eventually retired to. Then my other aunt and uncle moved down the road from them. Cousins follow, so as generations continue, the relatives out there grow and grow. On that 1967 trip my brother Joe cut his foot at the campground and got blood poisoning, ending up in the hospital the night we got home.

On one trip to the hills, Dad was sleeping in the back of the car and Mom and I decided to continue on to Devils Tower in Wyoming. Dad woke up a couple miles from our destination and was not thrilled, but he's smiling in the photos. We came back to Rapid City without too much of a detour.
That year, 1988, there were fires and while we stayed at my cousin Greg's motel on Canyon Lake we spent the night watching the glow of the flames in the sky, as helicopters dipped huge buckets of water from the lake to fight the fires. 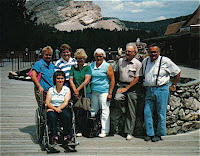 Since the relatives live so close to Mt. Rushmore and the Crazy Horse Monument, we usually go there for breakfast or lunch. These usually are our only touristy stops (and the fudge shop in Hill City).
I've also gone to the Black Hills twice with my high school band. 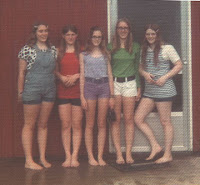 The first time, the summer of 72, when the HS band director decided to include many of the 8th grade students on the trip. We were there the week before the Big Flood in Rapid City and the motel where we stayed was totally flooded along Canyon Lake. 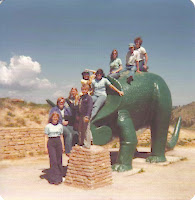 (This was the same hotel my cousin Greg eventually purchased) The second band trip there was my senior year in 1976.
I can't really count all the trips I've taken out to the Hills, but I've gone with family, the band and different groups of friends. Once I went and spent the week painting in the hills, while my friend Beth went to a workshop for work. Lets hope there are no fires, floods or injuries on this trip! I'll get back to you next week on the details.
Posted by Diane Johnson at 8:29 PM 2 comments:

Like I Said before, I've been photographing artwork I've done that I still have around. Many of the pieces I do now are examples I do for my students. Hopefully I inspire them with a project or to show a technique. I'm notorious for 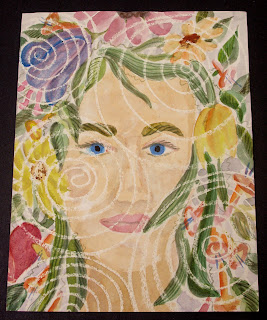 starting a project with them, but I never finish it, as I get too busy helping them or one of the other tasks the art room and teaching requires. I'll take a few photos of paintings I've given to Mom and Dad, that are on the farm, in the weeks ahead when I head that way for a visit.
Right: This is a project I do with 8th graders using crayon resist techniques with watercolors. 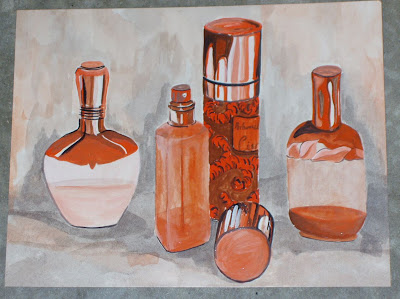 Above: I chose perfume bottles for subject matter for this monochromatic painting with tempera paint. I did this along with students at school. 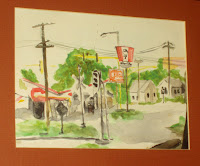 Left: This watercolor was done on location in Cedar Falls, IA, the summer of 1985, when I was taking a watercolor workshop at UNI with Shirley Haupt (1929-1988). All the buildings in the painting are now long gone at this intersection near the Historic Round Barn on Main St.
Shirley was a professor when I attended UNI and I had her for three drawing classes. She was my favorite art professor and about the age I am now when she taught me! 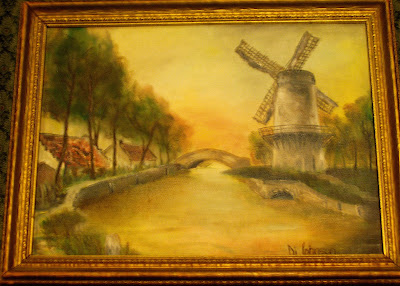 Above: This is an oil painting I did ages ago. We don't do oil painting in class anymore due to the toxicity.
Posted by Diane Johnson at 11:27 AM No comments:

"I believe in angels- that they're always hovering near, whispering encouragement whenever clouds appear, protecting us from danger and showing us the way. Performing little miracles within our lives each day." - Anonymous 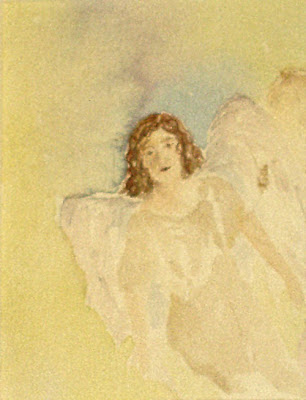 I've been trying to photograph some of the art I've created over the years. I painted this watercolor years ago. May the angels be your constant companions.
Posted by Diane Johnson at 8:19 AM 2 comments: