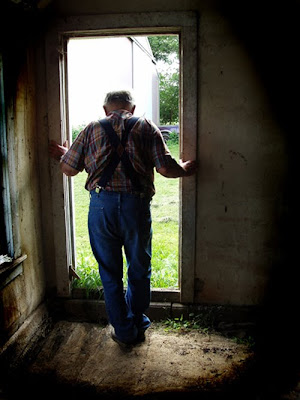 My Grandparents Joe and Phoebe Johnson lived in a small two room house on their farm while the "big" house was being built. They had a toddler, my aunt Joyce (b. April 1, 1924, at Moe Hospital in Sioux Falls), and made themselves at home in a two room abode that my Grandma fixed up with curtains, pictures on the wall, doilies, furniture, a cookstove and all the comforts of home. This hilltop location overlooked the Blood Run Creek valley and was close to Grandma's parents farm, below the hill. This is where my Dad was born, November 24, 1925, all 10 pounds of him. Grandpa Joe's niece, Amanda Long, came to help with the birth and do the cooking. Family lore has it that she made enough oatmeal for breakfast one morning to feed an army (of course she came from a family of 15 and obviously was used to cooking in larger quantities.)My ancestors were known to save papers and photos, but up to now we've only been able to find one photo of the little house, taken days after Calvin's birth. The family of 4 lived in the little house for only three weeks after Calvin's birth before moving into the larger family home (the home I grew up in.) Dad enjoyed the line, "I wasn't born in a barn but I was born in a chicken house." 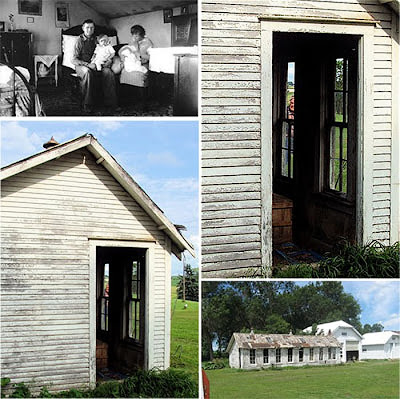 The little house became a chicken house, gone were the touches my Grandparents added to the furnishings it once held. Many years later it transformed into a storage building when Dad and some of his friends would fill it with old car parts and other miscellaneous items. Years after that one side was "cleaned out" so the west end where Calvin was born became a "cat house". Kittens and generations of cats were pampered here with left overs from family meals and other cat food Mom gave freely. In my childhood there was a line of lilac bushes going down the front of the chicken house, sheltering it from view. The clothesline was by the lilacs, including the swing at the end. Clotheslines were another childhood treat as I think back of all the blankets draped over the line and secured with a rock to create a tent to dream away the day in or venture to sleep in overnight (or part of the night.) When we were kids we'd put a ladder up on the blind side of the chicken house, facing away from the house and climb up to the roof and jump back and forth hiding from the "it" person during hide and seek. There was a junk pile out back where we put cans and bottles in an old oil barrel, things that wouldn't burn in the fire garbage. An old car was stored behind the chicken house, hidden from view so long trees grew up in the middle of the car, locking it in place next to the family garden including patches of rhubarb and winter onions.It was a little building full of history connecting us to loved ones that came down this summer. Dad started emptying the items stored in there, Mom's cats left over the years when they went to winter in Mesa and the missing or broken windows and holes in the roof and walls gave evidence it was time to retire. 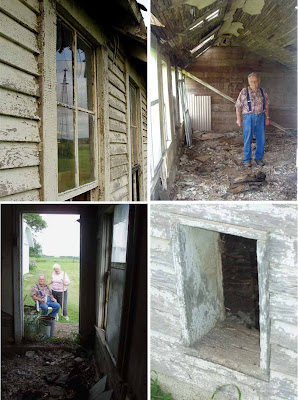 I came home to the farm at the end of June, prepared to help Dad empty the storage side. Many things in there had a story all their own. I found an old sled, our childhood swing, and a few other small items to rescue. There was a sewing machine my Grandma and Grandpa Wettestad got as a wedding present in 1910. We all knew it was in there but I can still hear Dad repeat, "We should have gotten this out of here a long time ago". The machine inside looked great but the wood cabinet had definitely seen better days. Out it came and has joined other family sewing machines from the old days in the machine shed. A little tug at the heart came when we came across my brother Steve's rock polisher that Dad made for him in his days of collecting rocks as a boy, another save had been made. Antique car parts, lights, tires, seats, carburetors, doors, windshields, all made their way to the scrap pile or movement into one of the garages. Plaster from the walls and ceiling had fallen amongst the clutter, broken glass and piles of nails, bolts, and other miscellaneous things scattered the floor as I finally used a rake to search for that missing treasure. What could I salvage from the building itself? I took the two doors from each end, a few windows and the sliding doors from the chicken holes. Photos were taken to capture the end of the old building, it was becoming an emotional goodbye. 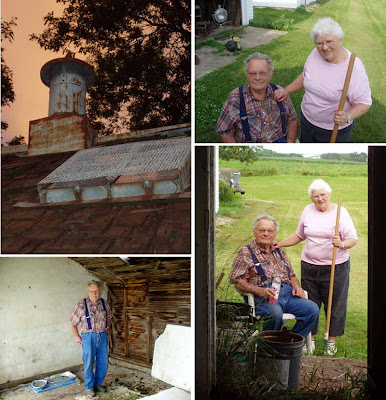 The day finally arrived, July 8th, when the Wulf brothers arrived with their heavy equipment to push the building down. (they also demolished a hog house and the corn crib, another posting perhaps) By luck it was the day my cousin Robin (Aunt Joyce's daughter) had come for lunch and a trip to some ancestral places in the area. We had just returned from our "tour" of the places when the big tractor trailer arrived with the caterpillar. Mom, Robin and I grabbed our cameras as Dad went out to be by the chicken house. It didn't take long to collapse the house so Robin and I could go out and rescue the couplas from the roof and pull out bricks from the chimney for a garden path. Once those things were clear the rest was crushed and compacted to be hauled away to a burn pit. I have to admit I got choked up when it first started to come down, especially when I saw Dad sitting close by to it overseeing the demolition. 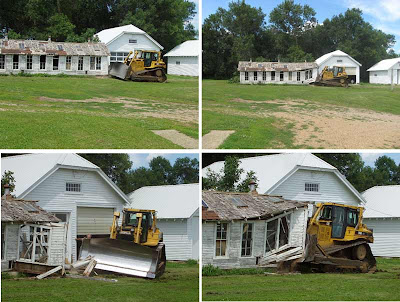 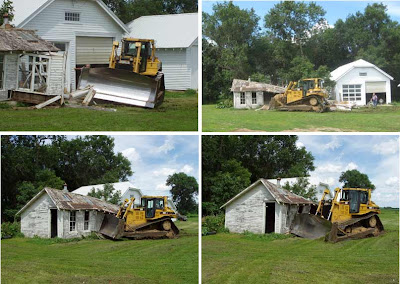 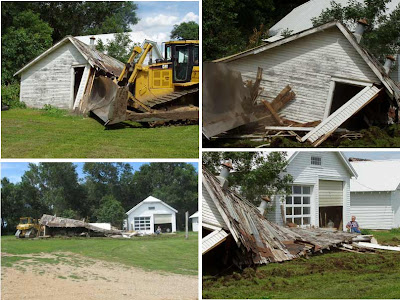 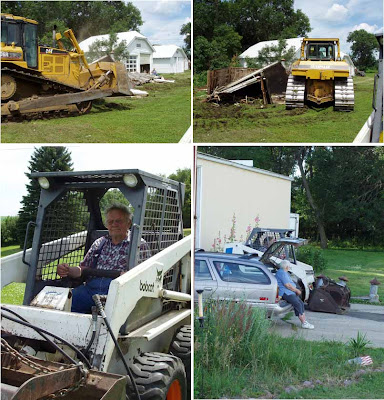 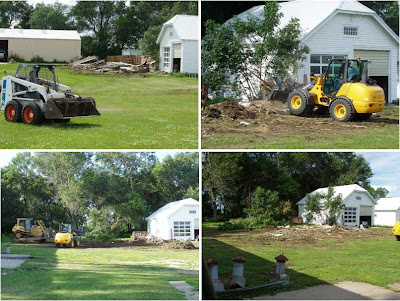