I'm editing this a little and reposting this due to the season.  I hope it helps you reach back into your own memories of Christmas past and those traditions near and dear to your heart.  Christmas is definitely a time for remembering.
Warmest greetings of the season
and every good wish for the coming year.
Önskar dig en trevlig jul
och allt gott för kommande år.

It is hard to decide on what traditions are from our Swedish heritage and and which ones are from other influences. Definitely the food has a Swedish flair as do the decorations.

and sod houses on the prairie when a traveling preacher came to the area in 1872. Julotta was a part of their service for many years, depending on the weather, the early Christmas Day service was a tradition carried down by ancestors of those first immigrants who traveled by sled across the plains to gather with family and friends at church. Candles are a traditional item used, starting with the days long ago when the trees were lit with candles and candles were placed in all the windows of our church on the highest point in our home county. Many services during the season are candle lit services.

My great Grandmother Anna Swanson (1863-1932) kept "Julafton" (Christmas Eve), a Swedish custom, with a Christmas Eve dinner including "Julegröt" (made with rice) and creamed "lutfisk". She had a large Christmas evergreen tree (spruce) decorated and lit with candles. A Christian Christmas program was followed by presents dealt out from under the tree.

As a child in the 1960's, I remember going to my Grandma Phoebe Johnson's (1900-1971) to celebrate with the aunts, uncles and cousins. Her 10 grandchildren kept themselves busy exploring the large home as the women prepared traditional foods such as lutfisk, meatballs, ham, potatis korv, pickled herring, serving limpa bread as well as treats of other special breads, spritz, rosettes, jellied

cookies, kringlor, lefse, krumkaka, pepparkakor and lingonberry deserts. It took some coaxing to get the younger ones to try the lutfisk, I myself, did not eat it until older. (It is a treat now.) When I was little everyone, even those that didn't indulge, would at least get a custard cup to have a taste of the traditional fish.  Following the food, the evening would proceed with the children saying their Christmas church program pieces and or singing a carol or playing their instrument, followed by Grandma reading the Christmas story from the Bible. The evening would be full of activity.

The youngest children were in charge of handing out of gifts to the group as the paper flew and presents were enjoyed by all, young and old. After much time playing with the toys and each other, the food was wrapped up, meant as treats and treasures sent home with all of those present. The tired group, the youngest having taken a nap under a big feather filled comforter, would head for church to attend the midnight service. Here we would meet with other friends and extended family at a candle lit service celebrating the birth of Jesus.

presents by Santa if they are good, so many a child was on their best behavior awaiting the treasures of Christmas eve and morn. At home we would leave a treat for Santa by the fireplace for him and his reindeer before going off to bed for a few hours. Of course Dad and or Mom would eat the treat as if Santa himself had been there. In the morning we had to wait to open our presents after my maternal Grandmother Celia Wettestad (1891-1972) was awake. We would stand over her bed, staring at her, discussing if she was awake

or not, until an eye would open to her grandchildren staring down anxiously at her.  Smiles and laughter would follow!

As soon as presents are opened it's time for more Christmas delicacies. The plate with treats is always full and the coffee pot ready throughout the season for that welcomed visitor that might stop in for a holiday visit.
Santa always brought the family a game on Christmas and Christmas afternoon became game time.  A puzzle was always out on a card table and recently we've all sat down together to watch a movie together.

Four generations of our neighbors family have continued the traditional dopp i grytan and often invite the neighbors in to dip and celebrate with them!

Over the years, fruit soup would be cooking on the stove and then jarred up for the older neighbor who appreciated the treat from the past. 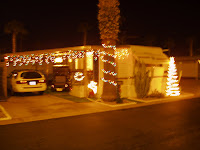 Years ago many of our holiday gatherings had older single neighbors of Swedish heritage joining us for our lutfisk meal with all the goodies to follow.

Now we're all headed for warmer weather, Christmas in Arizona! How traditions change... but we're still planning on lingonberries, limpa bread, lefse, meat balls, lutfisk and much much more.  The Christmas story, read from the bible, is one tradition that won't change either.
Posted by Diane Johnson at 9:53 AM 5 comments: