My parents are celebrating their 60th wedding anniversary on Friday, December 10th.  Married at Grandview Covenant Church, in rural Larchwood, IA, in 1950, it was a cold winter day but one warmed by two hearts joining together.  One wonders if they ever dreamed of this day sixty years later.  I made a book for them that is posted on my blog (temporarily) at the top of the page, take a look at their lives together.
Dad, born and raised on our family farm in rural Larchwood, was a young farmer.  Mom, born in Sioux Falls, was raised in locations in Iowa, Montana and South Dakota.  A graduate of Brookings, SD high school, she enrolled in Nettleton Commercial College in S.F., but left school at a job opportunity in February 1950, at E.J. Gustafson Company, a Philco Distributor in S.F..
February 1950, was a lucky month for her when she met Dad on a blind date. The dating period proceeded.
Parking in Dad's car, on what is now 26th Street (near McKennan Park!) in Sioux Falls, (At that time it was the edge of town!) Calvin asked Darlene to marry him and gave her a diamond ring in July of 1950.  Of course, she said "Yes!"  Dad remembered, "She cried."
The rest of the story is the journey their love has taken!
Dear Mom and Dad,
You both mean more each day, to everyone your lives have touched, in such a loving way.  One by one each year flew by since you both said "I do".  Sixty years of memories, shared by the two of you.  From big events and holidays, to simple daily pleasures.  Some tearful times along life's way, some joys that can't be measured.  One by one each year now gone, but still they're yours forever.  Each and every memory of sixty years together!
Happy Diamond Anniversary!
Love, Your Family 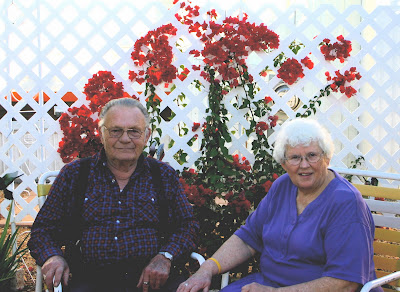 Posted by Diane Johnson at 11:44 PM No comments: