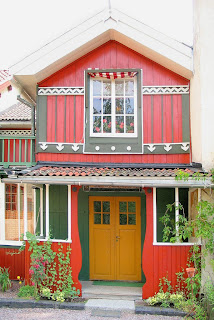 A favorite artist of mine for many years, Carl Larsson connects me to my Swedish heritage. One of my first encounters with his work was as a teenager, when as an exchange student, my host family in Sweden took me to his home in Sundborn, Sweden, on vacation in 1975. Carl and his wife Karin were given a small house by Karin’s father in 1888 in Sundborn, named Lilla Hyttnäs (little furnace). From that time on I could easily recognize his work in Scandinavian stores here in the states wherever we went and started collecting prints and other items with his work on them. For photos of his home and his art go to this link. 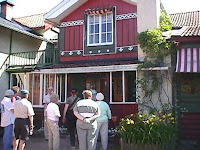 Little was I to know on that first visit, that I would return in 2001, with my Mom, Aunt and Cousin. We visited the village of Sundborn, going to the church first, awaiting the opening of the museum home. After our tour and time in the gift shop, we had a picnic lunch in the garden near the house just soaking in the atmosphere. 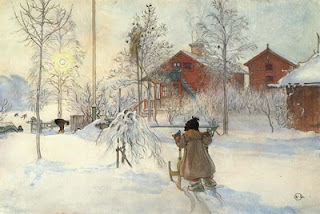 My first print I picked up on that first visit to Sundborn in 1975, hangs in my bedroom. Left: "Front Yard and the Wash House" His work is well represented in my home, I have stationary, a plate, trays, numerous calendars, boxes and prints. 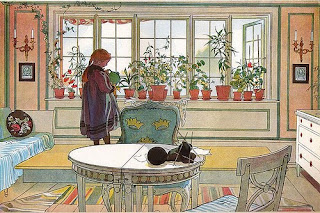 Right: "Flowers on the Windowsill, 1894" I have this print on a tray that hangs on the wall in my kitchen.

Posted by Diane Johnson at 4:25 PM

I only hope I get to visit there someday. What a blessing that you had that opportunity!