The tri-state corner post is about three miles NE, as the bird flies, from our farm in NW Iowa. It's had many looks over the years as it rested on a path, gravel road and blacktop road, before moving to a safer location off to the side of the road in South Dakota. It was a place to bring visitors for a great photo opportunity, especially when the post was in the middle of the road. I don't think I've ever had my photo taken there, but I have photos of others standing there. I travel on this road when I go home to the farm and have a tradition to cross over the center line and drive over the top of the location where the post was. It's sort of a welcome home path I look forward to on every trip coming and going.

Left: Soldiers were often brought back to the C.T. Swanson home for a home cooked meal while they were away from home. This unidentified soldier got taken to the post by the Swansons.
The location where Iowa, South Dakota and Minnesota meet, the Iron Post was erected by the Federal Land Office Survey in what eventually became the middle of a highway. An iron marker was erected by surveyors Snow and Hutton on August 4, 1859, when they established the western boundary of Minnesota.
Placed five miles northwest of Larchwood, IA, the post is one of four strategic spots along the surveyed boundary line between MN and SD. This fourth post was to be placed at the spot where the southern top of Minnesota meets the northern boundary of Iowa at the edge of a slough near Blood Run Creek. According to specifications which the surveyors followed, they were to keep a daily log and place small markers at intervals, but also to place four pillars, one at the junction of IA and MN. These markers were to be “pyramids of cast iron, three-fourths of an inch thick, twelve inches square at the base, tapering to seven inches at the top, marked with raised capital letters on each of the four sides.” They were to be placed three feet into the ground. 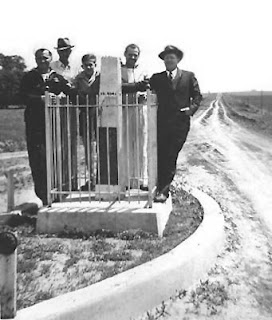 Right: Looking East, Photo by Irene Hildring, 1941. Her husband, Emil Hildring is the man in the back with the hat and Peter Brice is the boy.
When this boundary line was established, the land extending westward from the Minnesota-South Dakota border to the Sioux River was taken from Minnesota. From 1858, when Minnesota became a state, until 1861 when Dakota Territory was established, this area in the eastern part of Minnehaha County (SD), and along the eastern part of South Dakota was “Squatter Land” and had no established state government. It was a land unto itself, with no governmental affiliation.
Attempts at settlement had been made, with two land companies trying to induce settlers to come westward. An Army camp had been established near the present site of Sioux Falls. The potential of this part of the country was realized, but hopes of settlement were abandoned for several years after the Amidon Massacre and Indian uprisings in 1862. It was in the last quarter century of the 1800’s when the immigration movement began and settlement of the area came into full swing.
For over three quarters of a century the marker was left as it had been placed. The Iron Post, a monument in the center of a T intersection. It had become tilted, chipped, defaced and disreputable in appearance. It was removed in the early 1900’s after it was partially destroyed by vandals. Interested citizens realized the historical significance of this monument, and met in 1937 to form a committee to preserve it. Cooperation among township, state and federal governmental levels, as well as several private organizations provided the needed reshaping. It was repaired and reset at the original site under direction of the U.S. Department of Interior. Rededication ceremonies were held on October 19, 1938. 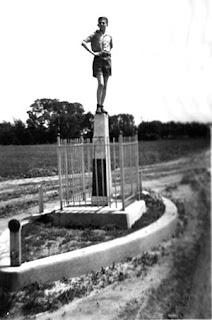 Left: 1941, Peter Brice in three states at once.
In 1979, it was broken from the base by vehicle traffic. Officials and historical societies from the three states decided to move the marker to a spot just off the original spot on the county road on the north side of the SD-IA border. In 1980, it was restored and relocated off the road at the intersection of 268th Street and 488th Ave. In September of 1981, about 200 people turned out for the dedication of the new tri-state marker at the borders of MN, IA and SD.
A disk marks the spot in the middle of the road where the marker originally stood. Many still stop to see the post and disk in the road, a landmark to the early settler and a guide to the transient. A monument to the open prairie.

Thanks for your history of the tri-state marker. We visited it last summer. I appreciate the background information!