Charles Alfred Barnes - my Great Grandfather on Mom's adopted side.
Charles Alfred Barnes, the son of Alfred W. Barnes (1824-1851) and Menora (Minora) Jannette Bassett, was born on Oct. 25, 1850 in Pittsford, Rutland Co., VT. His father died and his mother remarried Rev. Lewis Seymour Cooley (1831-1898). At the age of 7, he with his mother and stepfather moved to Woodstock, Ill. (1857). They lived there until 1861, when they moved to Littleton, Buchanan Co. IA when Charles was 11, they moved into town after two years on the farm. His stepfather being a minister, the family moved from place to place in the upper IA conference, his boyhood days were spent at Rockford, Mayville, Butler Center, Shell Rock, Union, Geneva and Nora Springs, all in IA.
While yet a young man he joined J. D. Andrews in the monument business at Crete, Neb., later he took up a tree claim 3 miles Northwest of Ellsworth, MN, Long Prairie Township and known as the S. E. Quarter of section 18, in township 101 North of range 43 west of the 5th principal Meridian in Minnesota and containing 160 acres. This land was acquired under the Acts of Congress approved March 3, 1873, March 13, 1874 & June 14, 1878, "To encourage the Growth of Timber on the Western Prairies." (V.A. Barnes note "I think he applied for this sometime in the year of 1872 but he did not receive the final papers until 1884 and I have the final papers signed by President Chester A. Arthur.) His brother George had located there sometime before and both of them went through all the pioneer days with many trials and privations, twice he was eaten out by grasshoppers, tree and crops, and he had to go back to Iowa and obtain more money to carry on, besides receiving help from his brother George. He went through the bad blizzard and hot and dry summers and strong winds. 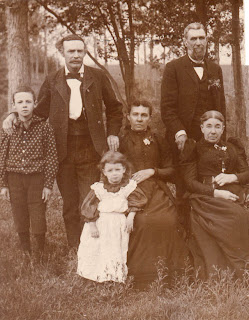 Right: Valdi, Charles, Celia, & Emma Barnes, Rev. Lewis & Menora Cooley.
His old partner, Josiah Daville Andrews gave him a letter of introduction to his wife's sister, Emma Pierce and after a long correspondence in which most of the courting was done by mail, he was united in marriage to Emma Cecelia Pierce of Ackley, IA, in Feb of 1881. They immediately left of Minnesota but on account of the heavy blizzard of that winter, the trip took over six weeks. Charles improved his tree claim, built a small house, set out trees, built a large barn and lived there until the fall of 1897. His health was none to good and early in the fall he had the chance to sell the place for 35 to 40 dollars per acre to Charles Loveland who had made a strike in the Alaska gold rush. Mr. Barnes was also desiring to go into some kind of business, so he sold the farm and moved to Ackley, IA. He went through all the hard times and pioneer days with poor crops and poor prices and Loveland had the farm and took 3 good crops at good prices and sold it for 65 dollars per acre.

Later in the fall of 1897, he bought two lots at the little townsite of Harris, IA. Osceola Co. and built a two story frame store and residence and embarked in the hardware business, moving his family there in the spring of 1898. He bought and donated the Church bell at Harris and for many years it called the people to worship. Many years afterwards the church burned to the ground and we don't know what happened to the bell. For twenty years he was engaged in the hardware business. He took an active part in all the City affairs and saw the townsite grow from a few places to a fairly large size incorporated town. In 1917, his health became poorly and he sold the business in the spring and moved to Sioux Falls, SD where he had a son living. He had planned on living a retired life of happiness with his helpmate for many years, but his plans lasted only three years for on Oct. 8th 1920, God touched him suddenly while he was on his way home from the neighborhood store. (heart attack) His burial took place at Mount Pleasant Cemetary at Sioux Falls, SD. His health had been none too good but there had been nothing to feel alarmed about and the Sunday before he passed away the family had been out to the cemetery and he spoke of buying a lot and picked the location where he would like to be buried and the plans had been to go out there the following Sunday and pick out a lot. It might be said in connection with this that we picked out the lot that he wanted but we found out about two or three later that it had been sold and so we had to move the remains and a monument to another lot that we bought.

Emma Cecelia Pierce Barnes - My Great Grandmother on Mom's adopted side.
Born 31 January 1855 east of Winchester, Randolph Co., IN. She moved with her parents (J.M. Pierce and Sarah Jane (Wilson) Pierce) to Iowa in the fall of 1855, to Ackley, IA, where she lived until her marriage. The newlywed couple moved to Ellsworth, MN for 20 years before moving to Harris, IA and in 1917 moved to Sioux Falls, SD.
She was a reader of the Bible for 60 years consistently reading it from cover to cover until she had read it through 29 times and was in the book of Psalms in the 30th cycle when she was taken with her last illness. Mrs. Barnes died at her daughters home at 1:30 Monday afternoon. She had been confined to her bed for 16 months as the result of her last stroke.

Emma and Charles had two children Valdimir Alfred Barnes (1885-1962) and Sarah Menora Jane Cecelia Barnes Wettestad (1891-1972) Both are buried next to their spouses and parents at Mt. Pleasant Cemetery in Sioux Falls, SD
Celia, my Grandmother, got her name by being named by her mother; Sarah after her grandmother on her mother's side, Menora after her grandmother on her father's side, Jenny (Jane) after her mothers twin sister, and Cecelia after her mother. She went by the name of Celia.
Posted by Diane Johnson at 10:09 PM