Today there are many adults who grew up in the tri-state area around Sioux Falls, SD, who are traveling back with their memories, to their childhood, remembering a man we knew as Captain 11. Dave Dedrick passed away last night at 81 years young. 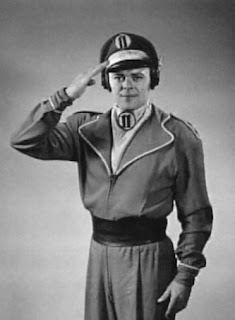 Each show opened with these words, "One man in each century is given the power to control time. The man chosen to receive this power is carefully selected. He must be kind. He must be fair. He must be brave. You have fulfilled these requirements; and, we of the Outer Galaxies designate to you the wisdom of Solomon and the strength of Atlas. YOU are CAPTAIN 11!"

The show played cartoons and featured the Captain entertaining the children with the treasure chest, flicking switches for his "crew members" playing games while he was dressed in a blue pilot's uniform. My favorite activity was to first wave one hand, then both hands, then wave both hands and jump, etc. until he'd declare "Now FREEZE!" Then he would pick some child to raise in the air in their frozen state. It all sounds so simple now but it was simplier times and oh so special to so many "crew members" remembering especially today.

I wrote to Dave Dedrick back in 2005 after seeing him at a funeral of a relative:
...I am a child of the early Captain 11 era. Now an art teacher in NE Iowa, another teacher in my district grew up in NW Iowa where I did and we were just talking about Captain 11 at school and our good memories of watching your show. I can imagine myself jumping up and down on one foot and now two feet in my living room and "freezing" along with the kids in the studio. I was also in the hospital when I was 5 years old and you visited our ward one day and I got a red balloon from you that you were handing out and I kept that balloon until is shriveled and laid down on the floor in our toy room to fly no more. How special I felt that you visited.
I just wanted to tell you how much you and your show meant to us kids of the 60's.
"... He must be kind. He must be fair. He must be brave. You have fulfilled these requirements..."
Flicking a switch on the time convertor for you.
Thanks for the memories.

Here is what he wrote back to me with the subject of his e-mail "Captain 11 Reporting"
Dear Diane,
I am flattered that you remember. I am also amazed at how frequently I am contacted by former Crew Members. Letters, phone calls, emails....all recalling some special thing we shared.
In retirement I can honestly say the rapport that exists between Crew Members and the Captain is most gratifying. Three generations of little people in four states have found a few moments for a flicker-flashback setting of happiness and carefree times.
That is most obvious when someone sees me in a restaurant or a hardware store and I stand in awe as I observe them staring intently before they point and ask," Are you Captain 11?"
"I used to be"
Then the metamorphoses sets in and they revert to being a little child as they rattle off their recollections of childhood memories. It is a wonder to behold. I just love it.
Thank you for writing and sharing...take good care of my little friends...
Posted by Diane Johnson at 11:28 AM

It is a sad day indeed when we lost our beloved Captain. He was a wonderful man, the kind of person you saw on your TV was the kind of man he was. I actually sold him a battery for his car years ago when I worked a JC Penneys in the auto department. We chatted while they installed it for him, and he was as gracious and warm then, as he always was on his show.
We have lost an icon.

My thoughts and prayers go out to Dave's family, friends and the entire community of Sioux Falls.
Your legend lives on in our hearts Dave!
With love,
Suzanne Dunham

Nice tribute!! the memories of this crew member will be bouncing with both hands and both feet. I did it at the studio and I did it at home every time he asked. God Bless Dave D....