The loghouse was a humble, friendly dwelling... a product of necessity and toil.
Our people came to Freedom’s Land with great zeal... made livelihood from scratch. They broke the soil!
They found new values in their work and home-life; and lent to stricken neighbors heart and hand.
True character is molded in a loghouse; For honesty and thrift they took their stand!
When winter’s biting cold would grip their cabin and snow drift high upon their loghouse door;
When in the nighttime hungry coyotes howling would horrify; or all food was low in store.
More faith and courage now, was theirs to muster to fight disease and hardship and their fear,
But God was Teacher, making strong their spirit and He was in this lowly home to cheer.
The springtime thaws brought joy and eager planning, and hope illumined their homestead fireside then;
And when, to worship, Christian friends would gather, their stronghold rang with, “Praise the Lord! Amen!”
Soon little feet would venture down the pathway, and Mother followed, keeping watchful eye.
They picked wild flowers to grace their cabin table as Sioux River sang a nap-time lullaby.
The friendly Sioux was bountiful in giving of waters, fish, sound logs for cabins new;
Vines laden with wild grapes hung low from tree tops and juicy plums and berries near by grew.
We prize our heritage of each quaint loghouse where noble dreams were born that must survive;
Let us in consecrated love go forward and, “Under God,” for peace and justice... strive!

Carl and Carolina Swanson arrived in Lincoln Co. Dakota Territory in 1870. Carl held a pre-emption claim to lands situated along the Big Sioux River approximately 8 miles north and one mile east of Canton, in what is now Dayton Twp. A sod house was built for their first winter. Over the next years, Carl planted many cottonwood trees and in 1872 constructed a log cabin on a hill. It's been added onto but all in all it's amazing it is still standing! 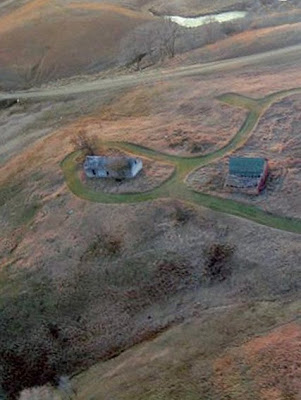 Love the aerial picture - would like to go back there some day. Let me know when you go there or to the Canton Cemetery - I missed that in 2005. We are having school today during the blizzard, but 16 teachers & aides couldn't get here, so no formal classes.