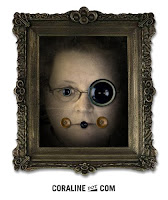 I subscribe to a newsletter called Photojojo. It sends ideas of projects you can do with your digital camera. On a recent post it suggested to go to the site for the film Coraline. I don't know much about the film, but it is stop-motion animated like the film The Nightmare before Christmas. The story is about a young girl who walks through a secret door in her new home and discovers an alternate version of her life and Coraline must count on her resourcefulness and bravery to get back home. To adapt a photo, here is The Other Mother's Workshop if you want to add buttons. I even buttoned my mouth in this one. I've seen some people use these portraits on their facebook photos!
Posted by Diane Johnson at 5:31 PM