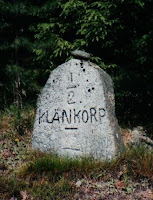 Klänkorp is the name of a farm where, at one time, my ancestors and relatives farmed and lived in Sweden. It is a small farm in Ljung Parish about a 5 minutes ride into the woods from the big road. So it really was in the middle of "nowhere." The stone to the right was out at the big road which showed where the turn off to Klänkorp was. 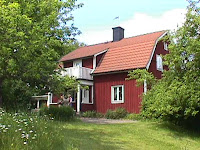 In 2001, we spent a couple days searching the area, visiting farms, distant cousins, churches and climbing the hills of the "old country" where my Dad's ancestors emigrated from. 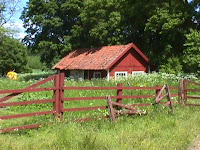 We were lucky to be greeted to this farm by the owners, Björn and Margaretta Åke. (Björn sang in the Ljung church choir at that time. Someone else could have been renting the land surrounding their home, I don't remember now...) They were very welcoming to us, inviting us into their home, which was built in 1925. The house is not the same one our ancestors lived in, but some of the out buildings dated back to the 1700's. 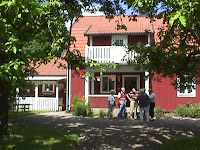 A friend I had met on the Internet, Inger Nyberg was our guide through the back roads and had visited the farms before we came to announce we would be visiting. Eighty year old Engwar Elfgaard also traveled with us. Although he didn't speak English he was very informed of our ancestry as his deceased wife was our 4th cousin. We continually commented on and now remember how friendly the Swedes were on our visits and travel throughout their country. 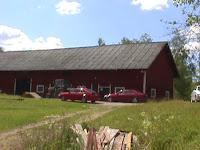 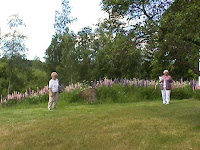 The day of our visit it was beautiful. The lupines we enjoyed each day, filling the ditches and fields, were in bloom and my Aunt Joyce and Mom couldn't resist having their photo taken in front of them not far from the Klänkorp house.

This old cellar/cold storage door was built into the side of a hill or berm not far from the house.
Both my Johnson and Swanson lines have connections to this farm. The latest was a cousin on the Johnson side who died there in 1901.
Posted by Diane Johnson at 5:22 PM