A longtime neighbor and family friend passed away this week, Axel "Junior" Bonander. Junior and my Dad grew up together as neighbors. Although he was three years older than Dad, Junior and Dad shared the same childhood church, closeness as only neighbors can know and raised their families at the same time about a mile apart.

Junior and Dad reminisced and talked of world events many times over coffee. The coffee pot was always on when Junior stopped or started when his truck drove into the yard.

They passed on many stories to me over the years. For example, one day in the 1930's, Axel "Junior" and Dad "Kelly" walked down to Granite to Ray Jensen's store and each had saved money to buy a pint of ice cream. Thinking ahead, the two boys each brought spoons from home and took their cold purchases to a ditch outside of town to enjoy their treat. After finishing their containers of ice creaem they scraped up enough money to go back and buy another carton to share. They also rigged up a telephone between their two rooms to keep in touch the quarter mile between their farms.

In January of 1943, Dad and Junior went to work in the Glenn L. Martin - Nebraska Company in Omaha, NE. They worked for $.60 an hour from 12:45 am- 8:30 am. Employees were expected to work five days in a row and then take off the sixth day and start again with the five day cycle. 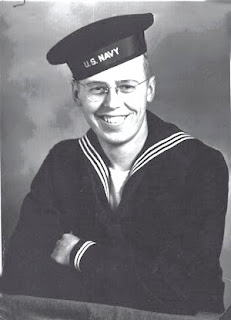 Junior entered the U.S. Navy in October of 1943, serving in Pearl Harbor and Okinawa, Iwo Jima and China. A local newspaper wrote the following article in the 40's In the Pacific.- Axel R. Bonander 22, electrician’s mate, third class, of Larchwood, Ia., is serving aboard an attack transport in the Pacific. He participated in the invasion of Okinawa and Iwo Jima. Bonander wears the American theatre and Asiatic-Pacific theatre ribbons. He graduated from Larchwood high school in 1940 and before entering the navy was employed as a machinist at the Martin bomber plant in Omaha. He is the son of Mr. and Mrs. Axel Bonander, Larchwood. His ship was the USS Berrian. He was discharged in April of 1946 and returned home to Larchwood.

Junior was Dad's best man at Mom and Dad's wedding in December of 1950 and Dad was Junior's Best man in his marriage to Donna Mae Hocke in 1952. 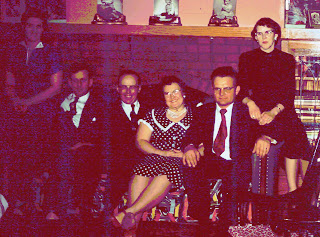 Left: Neighbors going out for an evening, January 27, 1057, Tracy and Carl Dieters, Junior and Donna Mae Bonander, and Calvin and Darlene Johnson. Below: Goofing off before going out, Mom in Juniors lap! and Virgil Bennett over to baby sit the kids. 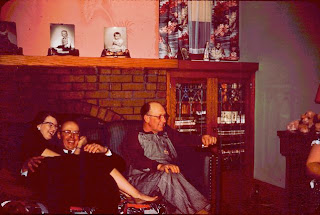 Axel and Donna raised their son Bruce, who was the same age and grade as my sister Deb, on section 20 of Sioux Township, in the same house where he died. Donna Mae died on October 14, 2002 in Rock Rapids, IA.

Junior always stopped by when I was home visiting my parents. He'd see my car up in the yard and drive in to say his hellos and share that cup of coffee with Dad. He died in his sleep on Wednesday, November 25th, 87 years old. Raising a cup of coffee to you Junior...
Click here to be taken to Junior's on line obituary and guestbook.
Posted by Diane Johnson at 3:16 PM

Nice write-up, Diane. I knew the name but now feel like I know him a little - I bet he and your dad had a lot of good times growing up in the country together. Those kind of bonds are probably gone now.