My cousin, Russ Swanson, recently flew over the old Swanson homestead (11/09) over by the Sioux River in Lincoln County, South Dakota and took this photo of the log cabin and surrounding 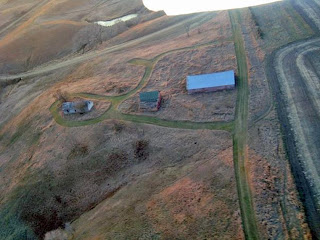 land. The cabin, built in 1871-72, has had additions and changes to it over the years of course, but the structure still stands, a testament to Carl's building skills and the family who cared about the first log home built on their land in Dakota Territory.
Carl August Swanson (Svensson) and wife, Carolina (Gustafsdotter), immigrated from Ljung, Sweden in 1869. The family, with three children, arrived with a covered wagon and team in Lincoln Co. in 1870. Carl held a pre-emption claim to lands situated along the Big Sioux River approxdimately 8 miles north and one mile east of Canton, in what is now Dayton Twp. Their covered wagon was overturned on a sand pit, near a spring, for the family's first shelter. Twins were born under this shelter in August 1870, while a sod dugout was built for their first winter. Carl left his wife and children that winter to work south of Sioux City clearing land for wages. At home, Carolina and her children had but a little corn and a half sack of flour to survive on. Over the next years, Carl planted many cottonwood trees and in 1872 constructed a log cabin on a hill. A son, August, was born in the cabin in 1876; the cabin yet stands. Three sons died in infancy; two were buried in the 1870's in a plot on the Juul farm, about three miles south, while the other is reputedly buried some distance southeast of the cabin, near what is a very large cottonwood tree known locally as the "hanging tree. In 1889 Carl was riding a young colt on the homestead when the animal stepped in a badger hole. Carl was thrown and the horse rolled on it's rider. Carl was gravely injured and died in 1890, at age 55. 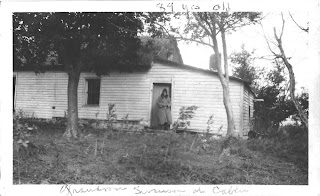 Several days before his death, he deeded all his lands to his wife, Carolina, who then lived in the log cabin until 1903. Carolina then lived with her adult children in Dayton Twp. and elsewhere until her death in 1932, at age 92.
Above: Grandma Carolina in front of the cabin.
"The History of Lincoln Co., S.D." Copyright 1985 by The Lincoln County History Committee, Canton, South Dakota. Printed in the United States of America by Pine Hill Press, Freeman, South Dakota 57029.
Check out an earlier post I did on Carl and Carolina at http://diane-johnson.blogspot.com/2008/09/karl-and-carolina-swanson.html
Posted by Diane Johnson at 6:20 PM

I wish I had your knowledge of our ancestors - they were such unordinary people with unique lives. Are all the relatives on your Facebook "Family Link" related to me? If so, I'll try to add them as friends - that might help me keep our ancestry straight. - love your blogging - keep it up.