Where have the days gone? I've been sick on and off for the past three weeks so that has taken me away from my normal activities to some degree and to my regular viewers, I apologize.

The flu, cold and cough made sleeping tough, then I topped it off with pink eye and some blown blood vessels in my eyes from all the coughing... Missing school and not feeling well puts you behind in more than one activity or task. I feel I am on the mend and hope to be getting "back to normal" with posting, grading, housework, laundry, and the million other things on my to do list. What is normal? Have I ever been "normal"? I guess you'll have to stay tuned...

On a genealogical note. My first cousin once removed, Myrtle Carlson passed away at the end of August at the age of 92. She was the daughter of my Great Aunt Lena Johnson Carlson, my Grandpa Joe Johnson's sister. After her funeral, my Mom and Dad were given suitcases and boxes of family items. Myrtle and her sister Muriel had done some genealogy research and written down many dates, names, identified photo and there is much to go through. They chose not to share any of this while they were living which makes it difficult now to go through as we can't ask questions. They were private people, never married and to put it nicely a little odd. Mom sent me some papers to go through, some has been given to other branches of their family tree on the Carlson side, actually some relatives on my Swanson side who also married into the Carlson family as well. It will take some time to get through it all. Another project for next summer perhaps? 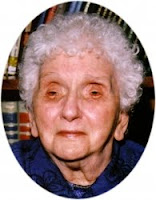 Here is Myrtle's obituary: Sioux Falls - Myrtle E. Carlson, age 92, passed away on Saturday, August 29, 2009, at Bethany Lutheran Home in Sioux Falls. Funeral services will be 2 PM Wednesday, September 2 at St. Mark's Lutheran Church in Sioux Falls. Burial will follow at Woodlawn Cemetery. Public viewing will begin at 12 Noon on Tuesday, September 1 at Miller Funeral Home (13th & Main Ave). Myrtle Carlson was born on January 20, 1917 in Ellis, SD, daughter of Frank and Lena (Johnson) Carlson. She grew up on a farm in the Hartford, SD area and graduated from Hartford High School in 1936. She, and her sister Muriel cared for their mother after an accident on the farm left her disabled. Following the death of her mother, Myrtle and Muriel moved into a home they purchased in the now Historical District of Sioux Falls. They turned the home into a boarding house and had many residents over the years. Myrtle and Muriel were the twins sisters, that weren't; they both wore the same outfits that Myrtle had designed and made herself. They were seen all over Sioux Falls, and especially made a point to attend funeral services in the area. Myrtle kept very busy volunteering with many organizations, including the Minnehaha Historical Society, Bethany Lutheran Auxilary, the Alzehiemers Association and the Old Courthouse Museum. Myrtle was an early member of St. Mark's Lutheran Church and was a very active member. She had served on many different organizations within the church such as Lutheran Circle, Office of Gospel Missions Auxilary, as president of the Church Women United. Both Myrtle and Muriel were members of the First Valiant Women of South Dakota. Myrtle kept active volunteering all of her life. In her free time, Myrtle enjoyed doing ceramics, crocheting and embroidering. Myrtle is survived by many cousins; Randy Maas, longtime friend, and many other friends. Myrtle was preceded in death by her parents, and her sister, Muriel.
Posted by Diane Johnson at 5:22 PM

OMG, Diane! You have had a terrible time! I do hope that you are on the mend.

I remember these sisters and some of the odd stories. Didn't know one of them was still alive until recently. Wish I had your keen genealogical mind to keep all of this straight. (By the way do you have my baptism date in your many file? Don't go to any bother as I can call the church and get it, too.)
Cousin Robin