Piecing together family history comes from many sources. I find it interesting to gather little tidbits of information to make a person from the past come to life to those of us who never met them. 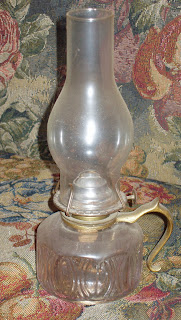 This is a lamp of my Great Great Grandma Carolina (Gustafsdotter) Swanson's that I have. My Great Uncle Elmer Swanson told Dad he remembered her softening wax by the heat of that lamp to put on her feet, supposedly to protect corns or sore spots on her feet.

Their first winter on the Dakota prairie her husband Karl went to work chopping wood thirty miles south of Sioux City and left his family with half a sack of flour and a little corn. It was Carolina and four children, ranging in ages of an infant under one to my Great Grandfather Charley age 8. They used corn soup to live on. The earth from the sod had sunk down from the roof and Indians would come peering down into the sod house. Carolina kept an ax beside her bed. The Indians never hurt them. I imagine they were mostly curious.
Imagine the cramped cold dugout that winter, alone with the children and her thoughts of what had they gotten themselves into.

Carolina suggested to her husband, tying a rope from the log house to the barn, as a guideline so he could find and feed his livestock during blinding blizzards. 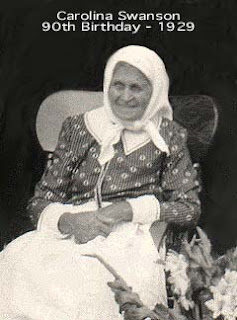 Granddaughter Helen (of Wheaton, IL) remembered in a letter to her cousin Mabel Swanson, "Grandma would get out her pipe and pull all the shades then I would curl up at her feet and she would talk and talk about those days. My only regret now is that I hadn't encouraged more of it." (referring to stories in a booklet written by her grandchildren about her son, my Great Grandfather Charley Swanson, "C.T.S. Pioneer Days")
In these days it's hard to believe a woman pulling out a pipe to smoke, but one can only wonder when she started smoking and how often. Oh to have heard those stories of this Swedish immigrant/pioneer.

Grandma Carolina was living with Mrs. Andrew Anderson in Rowena, SD when the Andersons got their first radio. While getting supper one evening Carolina was serious when she thought Mrs. Anderson should feed that man in the box too! (as told by Melvin Swanson)
Oh what would she think if our lives now!

Here is her obituary:
PIONEER DIES AT AGE OF 92
Dayton Township Woman Came to County in 1871; Funeral at Sioux Falls
DAYTON - (Special to The News) - Mrs. Caroline Swanson, age 92, who settled in Dayton township in 1871, died at the Andrew Anderson home near Rowena, S.D., on Wednesday night where she had been residing the past year. (Died Mar 16, 1932)
Mrs. Swanson was born and married in Sweden, coming to the United States in 1869. In 1871 they traveled by boat down the Mississippi at Lansing, IA and there began a westward journey by team, ultimately terminating in Lincoln County of Dakota Territory. For several years after arriving in this section, they dwelt in a sod house and withstood the many other hardships which were common to the pioneers.
Mr. Swanson died 41 years ago and five children preceded Mrs. Swanson in death. Surviving are four children, Charles T. of Granite, Ia.; Mrs. Phillip Jacobson of Rowena; Mrs. August Westling of Sioux Falls and August Swanson of Dayton Township; 28 grand children and 22 great grand children.
The funeral services were held on Saturday at Sioux Falls, officiated by the Rev. J.H. Ford of Beaver Valley church. Interment was at the Lutheran cemetery northeast of Canton, beside her other loved ones. Six grandsons acted as pall bearers. Mrs. Swanson left Dayton homestead a number of years ago living for a while in Canton before moving to Sioux Falls where she spent a number of years. To the writer’s knowledge she was the last of the very oldest pioneers who settled these parts.
Funeral services will be held at 2 o’clock Saturday afternoon.
Posted by Diane Johnson at 5:42 PM

Back in 1976, I was going to college at the University of South Dakota and was got involved in a skydiving scheme created by a French-Canadian character named Jacques Laperriere. Jacques had gotten himself elected mayor of Larchwood (or so he said). He had also finagled the use of (or swindled) a large parcel of farmland from an old fellow named Elmer Swanson. Elmer's farm became the skydiving jump site.

Is that Elmer Swanson your great-uncle? I only met him a couple times, but he was quite a character.

Yes, I remember the skydiving scheme as we had farmland next to it.
I don't think Jacques ever was mayor of Larchwood. HA.
Uncle Elmer died in 1986.
They're trying to build a casino in the area across the road now awaiting a gambling license. Always something going on in NW Iowa.
Thanks for your post.