Located about 12 kilometers northwest of Linköping, we visited Vreta kloster 6/22/01, and were lucky to find the church open and

Professor Paul Reinicke, a parishioner there, to act as a guide and interpreter for us. He was so knowledgeable, having written a book on the parish history. He took us from one end to the other, explaining the rich history. There is evidence that people lived in this area from about 4000 BC. and some of that is displayed in the church museum.

The oldest part of the present day church, a three naved basilica with transept and side isles, dates back to mid 1000 AD. (tombstones from 1060) In 1125 a royal crypt was added to transept with an extension in the south as a burial place for members of one of Sweden's oldest royal families. A crown hangs over a burial chamber, indicated royalty was buried underneath. The octangular burial vaults of the Douglas family were built in 1663, and now contain five copper coffins, this family is the owner of the nearby Stjärnorp Castle. The church tower was built in the 18th century to replace the middle age gabled structure and in 1914 the church was given a restoration followed by another in 1988. The front of the church was at one time for nuns and the regular parishioners sat in the second sanctuary. There were numbers on the pew doors and he said those numbers once were used by different farms in the area, each family having their place to sit. The pulpit in German and Italian style was presented to the church in 1658.
The actual cloister appears to have been founded in about 1110, considered to be Sweden's oldest known monastery. The Abby was reconsecrated in 1289 and its present character and appearance is preserved from this date. 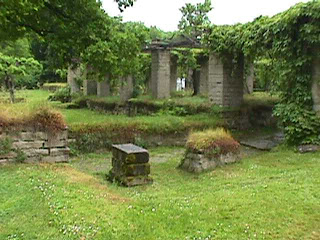 A nunnery and Abby, was a place where travelers could find refuge, the old could be taken care of and it was sort of a hospital also. Monastery buildings were partly excavated in 1916-1926. The excavated portion of the Abbey and Nunnery is now a place where many people's ashes are laid to rest after cremation. 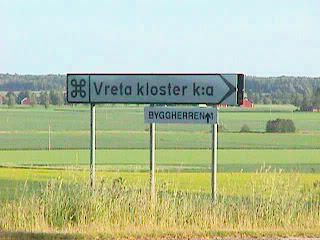 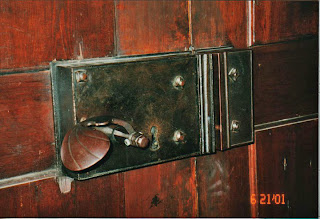 Left: The door handle to the church. I wonder if any of my ancestors placed their hand on this handle as I did?
My 5 and 4th Great Grandparents (on my Johnson line) lived in this parish. 5th GGrandparents Anders Johnson (1707 - 1790), and Maria Persdotter (1701 - 1780) both died at Brink, Vreta Kloster. I have these notes on Maria, "...she was first married with the widower Hans Tyrsson. This marriage last for 15 years and she gave birth to 5 children, one son and four daughters. After 1 1/2 year of widowhood she married Anders Jonsson and give the birth to two girls of which one was still alive the year 1780. Her (Maria´s) health had always been good but with rising age only worse and worse and her last four years confined to bed. She never complained till her transformation occurred on Dec. 21, 1780 in an aged of 79 years." Sourse: WHF 68-412. My 4th GGrandparents Anders Bengtson, a farmer, (1738 - 1805), and his wife Maria Andersdotter, (1742 - 1831) lived in Brink, Vreta Kloster Parish.
My 4th GGrandparents Nils Månsson (1779-1811) and Anna Maja Larsdotter (1776-1848) were married in Vreta Kloster in 1801. Both of Nils parents died when he was 2 years old and he was raised by his Uncle Nils Nilsson in Pålstorp, Vreta Kloster. Nils and Anna both died in Solberg, Vreta Kloster. Although Nils died at the age of 31, he and Anna had four children. Their son Magnus Nilsson was born in 1804, at Segerstorp, Vreta Kloster. He married Maje Persdotter. My Grandmother Phoebe left handwritten notes about her GG Grandparents; "With much patience Magnus (1804-1871) raised his children, he was an upright man but suffered rheumatism, lived to old age. Maje (1805-1859) was very kind but grief overtook her after death of younger children and she died middle aged in an asylum." (note from Phoebe Swanson Johnson) Their daughter Greta was married to Adolph Swanson in Brohemmet, Ljung in 1860, and were my GG Grandparents who immigrated to the US in 1889.
Of course there are many cousin connections to Vreta Kloster as well in my records.

Above: A view from the church looking towards Lake Roxen and Linköping in the distance.

Left: This barn was across the road from the church. We found it interesting as it had a road going up into the second floor.
Posted by Diane Johnson at 7:08 PM

Wonderful blog! Next week I'm heading to Vreta Kloster with my sister. All of our ancestors came from Vreta Kloster and Ljung area around 1870. Reading your blog really has made us get excited about going to Sweden. I wish we were related! Two families that came from this area moved to Iowa and three boys from the Carl Gustaf Anderson (m. Sophia Eigil) married three sisters from the Johan August (Bjur) Johanson (m. Fredricka Nelson) family. One couple was our grandparents.

Dawn, Thanks so much for your comment! If you want to e-mail me, my e-mail is 424johnson@gmail.com You never know, we may connect in some ways. I also have some contacts in Ljungsbro nearby who know about the genealogy of the area. My ancestors came to the Extreme NW corner of Iowa and some to the Albert City, IA area.
Diane

Wonderful entry! I have recent ancestors from there. Love your photos!