For the family members who are logging onto my blog, here are some maps of the area our ancestors lived in Östergötland, Sweden.
The first map below, was sent by a friend of mine (Inger Nyberg) in Ljungsbro, Sweden about 10 years ago. She underlined some of the farms in our ancestry around Ljung. This area is just north of the city of Linköping.
Before he was married, my Great Grandfather Anders Peter Jönsson lived with his parents in the cottage Slättmotorp in Ljung parish. He moved in 1854, to the farm Djupsjö in Ljung parish and worked for the farmer Bengt Jonsson. In 1855, he moved to Tjällmo parish and came back to Ljung parish in 1859, and worked for farmers in the village Slättmon. In 1860, he moved to Bänorp. There he lived and worked on a farm when he married Albertina Gustafsdotter in 1873. Albertina was born and lived in Nybrofallet, Kottorp, Stjärnorp Parish until her marriage to Anders. Together they lived in a cottage Fredriksberg, that belonged to the Bänorp farm in Ljung parish. Albertina and Anders Peter moved in 1874, to the cottage Nysätter. In 1880, they moved to Grönkulla and in 1881, to North America where they ended up in the Canton, SD area.
Click on the maps to enlarge, can you find some of the farm names? 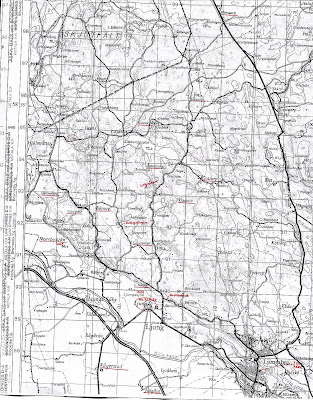 Below; this map (two views of the same map) is from 1878, and shows some of the old farm places. It even has Brohemmet and Fallhemmet on it, the homes of my GG Grandparents (Swanson sides) who emigrated from Sweden to America.
My GG Grandfather Carl August Svensson was born at Brohemmet, Ljung, in 1832 Apr. 19, (son of Sven Svensson, born 1801 Jan. 6 in Klasbäck, Ljung, and his wife Catharina Larsdotter, born 1802 Jun.13 in Stora Högåsa, Ljung.) Carl August was a crofter at Fallhemmet on Norrby lands in Ljung. He was married in 1862 May 9 in Stjärnorp to Carolina Gustafsdotter, born 1839 Aug.2 in Grönlund, Stjärnorp. (She was a sister to my G Grandmother Albertina mentioned above and they were the daughters of Gustav Jönsson & Johanna Nilsdotter) They lived in Fallhemmet with Karl's brother Adolph and his wife Greta. Karl and Karolina and three children emigrated from Ljung to North America in April 1869, eventually settling near Canton, Lincoln County in Dakota Territory.
My GG Grandfather Adolph Frederik Svensson was born at Brohemmet, Ljung, in 1835 Feb. 22, (also the son of Sven Svensson and Catharina Larsdotter) Greta Månsson was born in August 1, 1840 in Lillbränna, Åsnästorp, Ljung parish. Greta came to Sven & Katerina’s home, Brohemmet, to help the ill mother Katerina as her husband Sven was sick and eventually died in Oct. of 1860. Greta ended up marrying Adolph at Brohemmet in Dec. of 1860. Soon brothers Karl and Adolph Svensson built a home north of Brohemmet in the woods and called it Fallhemmet. Adolph and Greta emigrated from Ljung in April 1889, via Copenhagen to New York to Canton, South Dakota. 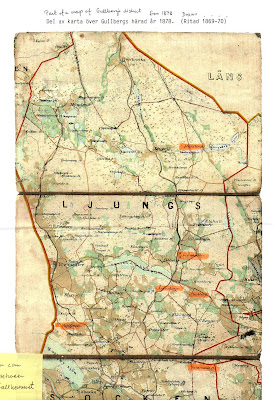 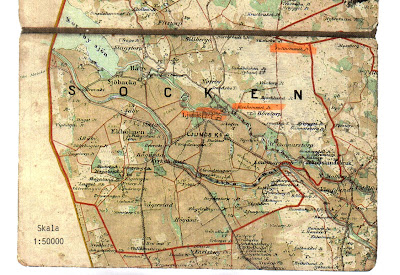 Posted by Diane Johnson at 7:51 PM