My Great Great Grandfather, whom I've talked about on my blog before, emigrated from Ljung, Östergötland Sweden in 1869 with his family. We have some family stories but of course always want to know more about his life at his homes in Sweden; Brohemmet, Fallhemmet and his immigration to Dakota Territory and life there. Carl died in 1890, after a year of suffering, his horse stepped in a badger hole and rolled over on top of him, breaking his shoulder blade, collar bone, and some ribs. 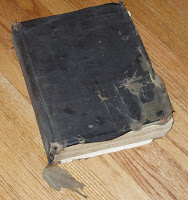 We found his bible (Swedish with a copyright date of 1855) made it's way to my parents home, via his oldest son's home (my Great Grandfather) and a little traveling until we gave it to my cousin A.J. Swanson recently. A.J. lives on the Swanson land near the cabin Carl built in 1871. The cabin is still standing and A.J. is busy with returning the land to a prairie, like it was when Carl and Carolina arrived. 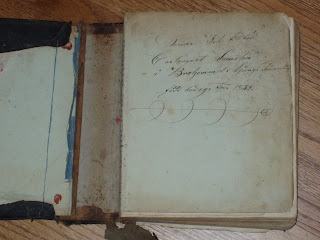 The bible has an inscription in the front cover jacket pages which says "Denna bok till hora Carl August Svensson Brohemmet i Ljungs Forsamling född dan 19 Apr. 1832". This book belongs to Carl August Svensson Brohemmet in Ljungs Forsamling born April 19 1832.
It was a pleasure for us to return it to the Swanson farm he homesteaded on and we know it will be treasured for years to come.
Posted by Diane Johnson at 10:21 AM