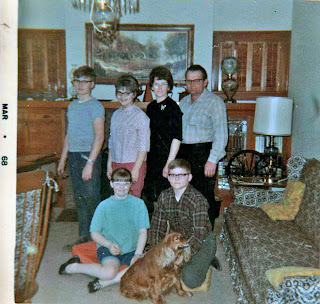 A chance for a family photo back in 1968. Mom and Dad were going out, all dressed up, Blondie joined in for the smiles. Things I notice in there are the spinning wheel, we'd spin and spin that thing, I don't think we ever really spun wool on it but I imagined someone in days of old doing just that. It's moved to the landing going upstairs. The B & W TV/Stereo is behind the rocker, it's so huge! This is where I played my first records, danced to American Bandstand. The sofa, couch, davenport, wonder how those names all came to be? This was the longest one I've ever seen. It could fit 6 people in days when you visited neighbors and families got together often. It was a place to lay when you were sick, get back scratches and rubs from Grandma and fight for a corner when watching TV. The living room has changed so since then, but I guess 40 years deserves some change. 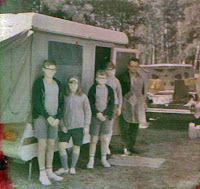 In 1967 we took a vacation to Yellowstone with our neighbors the Dieters. At the Black Hills the two groups split up and we stayed a few days longer at a camp ground. This was before our relatives all moved out to The Hills and little did we know they would buy land less than a mile from this camp ground near Hill City, SD. Here we are dressed in camping gear. I love Dad's see-through plastic apron protecting him as he cooked and notice the trunk of the Cadillac being used as a clothes line. Joe got cut by a can in a creek here and after arriving back home in Larchwood he was rushed to the hospital in the middle of the night with blood poisoning. 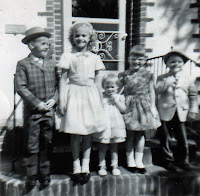 The front steps of Grandma Johnson's house in Sioux Falls in 1960. It's us four Johnson kids and cousin Robin Whitcher. I love the boy's hats and how Steve looks like a little man straightening his tie.

Our favorite summer activities were outside. Mom made this one happen for us. She'd hook the garden hose up in the ladder and we'd run through the spray of water. It looks like Steve took over the hose and the rest of us have buckets trying to catch the water for a waterfight. If you listen hard you can hear the joyful sounds of screams of laughter and fun from more than 45 years ago.

I enjoy hearing and seeing your memories. There is nothing like family and family memories. Love, Carol