Takes Your Breath Away 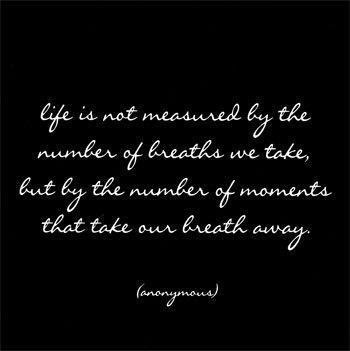 Kids, some of the things they do just leave you speechless. We can watch a sleeping baby for hours and feel the love and wonder of God's miracle or see a toddler perform on cue and think we need to catch a photo of that, to prove to them it happened once. Probably for that reason, Mom took this photo of the Johnson kids in the tub in 1958.
You have to admit, we're kind of cute in there.

There's nothing better than coming home. This is a view of my parents home from the top of the driveway. The house is on top of a hill so you don't get the full effect of being home until you reach this point in the driveway. 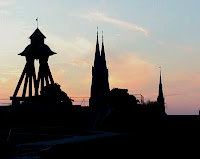 Uppsala, Sweden. Our group of four stopped in Uppsala in 2001, to visit with my Swedish brothers from my student exchange days in 1975. We stopped at Uppsala and connected with them and their families for an evening. They took us sightseeing before having a family reunion outside of the city. This view as the sun sets takes me back to that day. 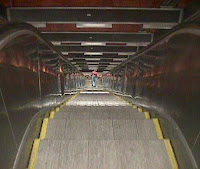 In Stockholm we decided to ride the subway back to our hotel after a long day of sightseeing. It was only about 4 blocks to our hotel but we decided we were tired and would explore the underground railway which had a station stop underneath our hotel. Little did we realize, was that we traveled down level after level until our laughter wouldn't stop with the steep escalators going down, down, down to meet our train. We figured we went down as far as we could have walked to our hotel! They were the longest, steepest excalators I've ever seen, one after another. 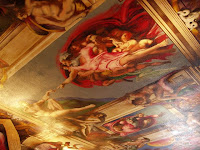 Paco Rosic's spray can art interpretation of the Sistine Chapel in Waterloo, IA. Yes, this ceiling was painted with spray cans of paint! It's even more amazing to see in person. 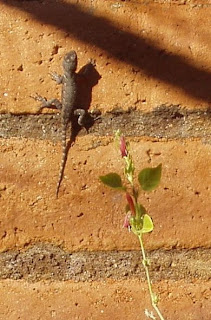 Maybe it's the farm girl in me that has led me to appreciate nature. It's a simple lizard climbing a brick wall. I wonder if it knew I was there taking it's photo or if it even cared. 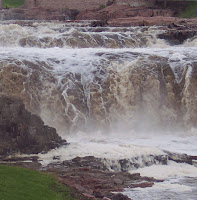 The Sioux River Falls in Sioux Falls. The power and magic of waterfalls, I'm fascinated by waterfalls. I love watching the water fly over the rocks and have searched out waterfalls wherever I travel. Luckily this one is close to "home".

Are you sure we are not sisters!?! rather than cousins a couple generations removed? As I looked at all your photos it was like looking at my own photo album, we enjoy so many of the identical things. Must be several threads holding us together, our heartland roots, our genes and the goodness of a God infusing our lives with all that is beautiful to Him as well!