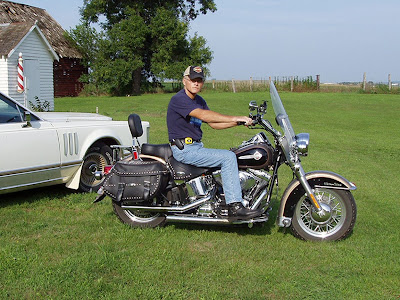 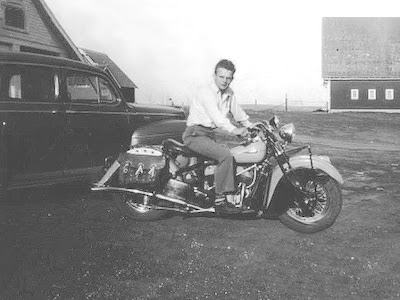 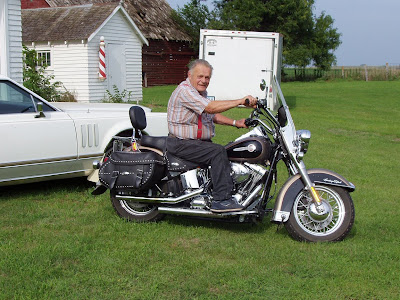 In 2006 Steve stopped off at the farm after a trip from CA through Yellowstone, Devil's Tower, The Black Hills and the Sturgis Bike Rally. We couldn't resist posing him and Dad with his Heritage Softtail Harley in the same position Dad had a photo taken back in 1946 with his Indian motorcycle.

I didn't have school Friday, due to working two nights with conferences this week. A day off! There's always something to do around here. It started with tech problems, no e-mail no internet. A few phone calls later... I got it back around noon.
It seems I play "catch up" all the time. I froze some tomatoes, I had picked green ones a couple weeks ago before the first freeze, they're turning red thanks to newspaper. Cleaned, picking up is a constant... worked on the computer trying to clean up my desktop and that's when I came across the photos above. I saved time to have a nap of course.
Snow appeared here in Denver for the first time of the season. It was hard to believe we had weather in the 70's earlier in the week and windows open and now have the furnace on and blankets near.
Today I'm continuing the pick up/catch up thing. I brought home a machine from school that will transfer VCR tapes to digital - going to give it a try and figure it out. Have a bunch of photos to scan for my Aunt of her daughter Linda. I'm making a movie of Linda through the years for her. Thanks to my cousin Robin for helping scan some photos to add to the collection. I better get to work... Have a good weekend!
Posted by Diane Johnson at 6:33 AM

This is so fun to see! I have a website (somewhere around here) that shows different communities in Iowa in the 30s and 40s that the government had commissioned. I've always wanted to have my photography students research those and take the same 'pose' in today's setting. I think that would be amazing to make the comparisons. Your images this morning have inspired me to pull those out again! See you on Tuesday...boy, am I ready for some quality time with my art teacher friends!