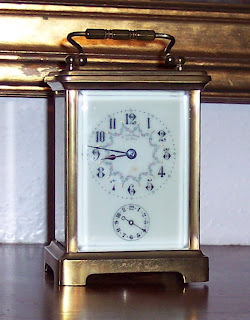 Mom and Dad have an antique carriage clock that was purchased by Dad's cousin, Beth Swanson, when she worked on stage in the opera in Europe in the 1960's. She knew of Dad's interest in clocks and found this one for him. It has ten Boom on the face of the clock in hand painted porcelain. We have always wondered at the chance it would be from the ten Boom family, since hearing of Corrie ten Boom's "The Hiding Place" story.
Corrie was a Dutch Christian Holocaust survivor who helped many Jews escape the Nazis during World War II. She began training as a watchmaker in 1920 and in 1922 became the first female watchmaker licensed in the Netherlands, following in her family business. Wouldn't that be amazing if our clock did come from that family of clock makers?

The clock has a box with a glass front for protection and viewing. A carriage clock is in a rectangular housing, designed for travel in the 19th century.

Since people traveled by carriage in this period, these clocks needed to stand up to the rigors of a trip without failing. Carriage clocks reached their zenith in the late 1860s. Several characteristics can be used to identify a carriage clock. The first is the case, which is usually made from polished brass or another bright metal. The face of the clock is covered in glass, while the hands may be placed on a porcelain background to make them clearly visible.
If anyone reading this knows more about this clock please contact me.
Posted by Diane Johnson at 10:59 AM