It's my Dad's 83rd birthday, November 24th. He was born on the farm he has lived on his whole life except for his years of service in the Army back in the 40's.

Dad grew up a middle child and the only son. He attended country school through the 8th grade and then attended Washington H.S. in Sioux Falls, SD.
Always having a nack for things mechanical, he built a radio in his youth, drove at a very young age and began a love for old cars. Farming became a lifetime occupation.
He left H.S. to attended NYA school in Sioux Falls where they trained you to be a machinist. After graduating from there he and a neighbor went to work in the Glenn L. Martin - Nebraska Company in Omaha, NE, January 1943 - March 19, 1943. He was offered a job in the Machine Shop at the starting rate of $.60 per hour with the regular work hours of 12:45 a.m. to 8:30 a.m.. Employees were expected to work 5 days in a row then take off the 6th day and start again with the 5 day cycle. 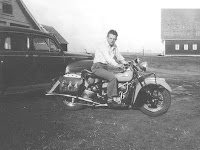 He worked on the W strut, of the B-26, part of the landing gear, testing it for hardness. When his sister, Carol Ann, started H.S., Cal's mother talked him into going back to H.S. and he went until he was drafted into the Army.

His Mother wrote the following on October 20, 1946, when he was in the service, stationed in Japan. 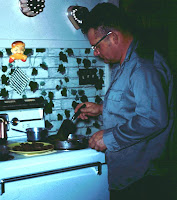 Dad's kitchen specialty is breakfast, here he is back in the 60's making Christmas breakfast. I think it's because he's picky about how his bacon is cooked. 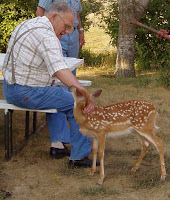 He has a love for all animals as shown through the many pets we've had on the farm. Here he is with the neighbors deer.

He's a true family man, always being there for any of us in need. Special memories I have are of him singing to me in the old pick-up as we took off on an errand, my favorites include "I Want to Buy a Paperdoll that I Can Call My Own" and "Swim Says the Fishies". Then there are the duets on the organ and piano, any hymn would do as long as it was from the brown hymnal. He loves to roll the cords across the keyboard although a farm accident left him a little short handed when he lost part of his fingers in the late 70's.

Dad loved roller skating too. We were regulars at Valley Hi roller rink on family night and West Sioux. We all had our own skates and loved it when Dad would skate with us and twirl around the floor. Then there's his love for antique cars and all the car trips and events we've gone on over the years. There are many more memories and more photos to scan... maybe they'll get done for next years' birthday Papa.
Happy Birthday, Love and Hugs, Diane (Ruleaslupe) 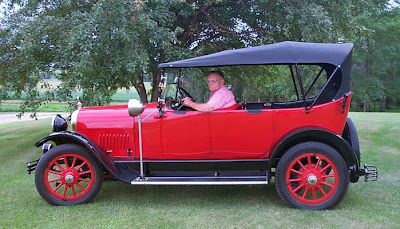 Posted by Diane Johnson at 9:45 PM

I feel as if I know your family first-hand through your blog...and they are a WONDERFUL group of people! Happy Birthday to your youthful 83-year-old dad. He sounds like a wonderful father and friend. Hope his surgery went well last week. I am amazed at how much you look like your dad. Have a wonderful 'short' week at school and enjoy a much deserved break to reflect on all of the good things we have to be thankful for!