I've realized I haven't posted a genealogy focused posting for some time so this one will focus on my Great Great Grandparents, my father's mother's mother's parents (far mor mor far & mor).

Adolph Frederik Svensson was born February 22, 1835, at Brohemmet, Ljung, Östergötland, to Sven Svensson and Katerina Larsdotter. Greta Månsson was born in August 1, 1840 in Lillbränna, Åsnästorp, Ljung parish. She was baptized on August 2, 1840. Her parents were Magnus Nilsson and Maja Persdotter. She was only seven years old when her mother died, but her father was good and with much patience he trained and nurtured his children. As a little girl Greta had the job to herd cows in a large and wide woods and later came to the Swanson home at Brohemmet to help Adolph's mother, Katerina, as she was ill. Adolph's father died October 8, 1860 and the young couple had fallen in love and married December 23rd that same year. They built a home north of Brohemmet, and lived there for 27 years calling it Fallhemmet. They had about 7 American miles to walk to the Ljung church. The scenery was beautiful, and they picked lingonberries in the woods and "goken" cuckooed in the treetops. They were both devout Christians. My Grandmother Phoebe said Grandpa came out of the revival in Sweden. Adolph would send for and read Christian books and Christian papers here in America. He would gather his family around him on Sunday afternoon and read the sermon for Sunday.

Adolph and Greta were the first immigrants of their Swedish community to Celebrate their 50th wedding Anniversary in America. They settled near Canton, SD, moved to a farm near Larchwood, IA, then to a farm southwest of Valley Springs, SD to retire.
The following was written by their pastor here in the U.S. in Swedish and translated by their Granddaughter Mable Swanson, my Great Aunt. 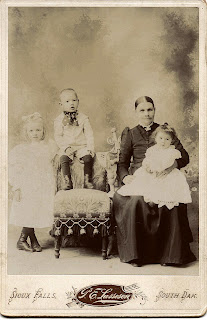 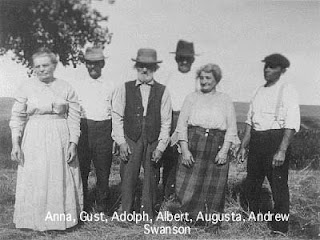 Greta's Obituary notice (Original in Swedish - translated):
It is hereby announced to relatives and friends that God has graciously recalled my dear beloved spouse Greta Svenson who peacefully went away in the faith of her Saviour on the 5th of February, 1911, at the age of 70 years, 6 months and 4 days. She was born in Ljung, Östergötlands län, Sweden, on the 1 of August, 1840. At age of 14 she was saved/redeemed and by his power she kept her faith until her redeeming moment. She was married to me on the 23 of December, 1860. The chief mourners are her husband and 6 children and 18 grand children.
Frid över hennes minne (May she rest in peace) Återseendets morgon randas snart. ( The morning of reunion is soon to come). Herre låt ditt ansikte lysa, så varder oss hulpit. Oh Lord, let your face shine, so........??)
Adolph Svenson, Valley Spring, So. Dak., the 9th of February, 1911. 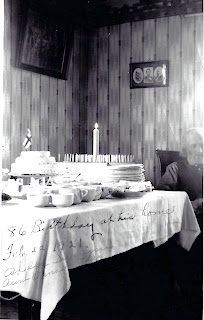 Adolph's Obituary:
It is hereby announced that the good Lord has called upon our dearest beloved father
Adolph Frederik Swanson
He was born in Brohemmet, Ljungs congregation, Östergötlands county on the 22nd of February, 1835. He was married to Greta Magnusson on the 23rd of December, 1860. They emigrated to the USA in the Spring of 1889. Not long after they had celebrated their golden wedding anniversary in 1911 the Lord called upon our mother. During the two last years he has had his home and care with us children. Father caught some illness not long after Christmas and in the evening of Monday the 26th of February, 1923 his spirit left the fragile body to live with God. He turned to God in his youth and kept his faith and completed the race. We want to thank God for his comfort in our sorrow and loss.
He is mourned and missed by his children and grandchildren and great grandchildren and many friends.
Peace over his memory.
Granite, Iowa the 5th of March, 1923.
His children
Posted by Diane Johnson at 6:59 PM

I don't know if it is the time of year, or the fact yesterday I was at the funeral of a dear friend, younger than John, who died of a heart attack, and was therefore reflecting on my own loved ones 'gone before;' but just reading backwards from today, (December 2)through these posts stirs up so much loving emotion and perhaps a 'longing to be HOME.'
Thanks so much for keeping alive the connection to those gone before, and some of course still with us.