My Dad left Washington High School in 1942, to attended NYA school in Sioux Falls, SD, where he received training to be a machinist. (The National Youth Administration (NYA) operated from 1935 to 1943 and was part of the New Deal agency in the United States.)
After graduating from NYA, 17 year old Cal and his neighbor Axel Bonander Jr. went to work in the Glenn L. Martin - Nebraska Company in Omaha, NE, January 1943 - March 19, 1943. Dad was offered a job in the Machine Shop at the starting rate of $.60 per hour with the regular work hours of 12:45 a.m. to 8:30 a.m.. Employees were expected to work five days in a row then take off the 6th day and start again with the five day cycle. He worked on the W strut of the B-26, part of the landing gear, testing it for hardness. 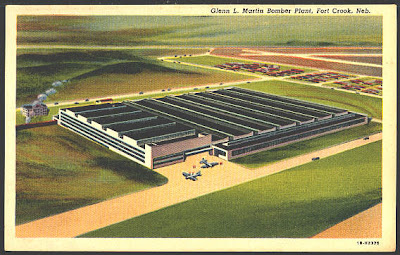 The Glenn L. Martin Company in Nebraska was established on February 14, 1941, upon the signing of a contract with the U.S. government for the construction and operation of an aircraft assembly plant at Fort Crook (now Offutt Air Force Base). The huge aircraft assembly facility was built just south of Omaha and built 1,585 B-26 Marauder medium bombers and 531 huge B-29 Superfortresses – including the "Enola Gay," the plane that dropped the atom bomb on Hiroshima. The plant reached peak employment in November of 1943 when 14,527 persons were employed at the Fort Crook facility. The plant closed in September of 1945.
Posted by Diane Johnson at 4:04 PM