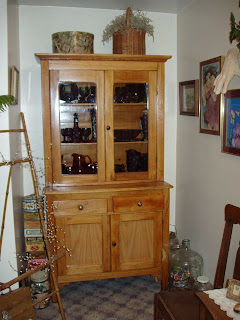 They immigrated in 1881, from Ljung, Östergötland, Sweden to North America and settled on a farm near Canton, Lincoln, SD, in Dakota Territory, in June 1881. In 1903 Andrew and Albertina, with 3 of their children (Carl, Lena, & Joe), moved to a farm near Tea, SD.
The cabinet was known to have been at the Tea farm. It ended up in our big garage, one of the first buildings on our farm and in my lifetime I only knew it to hold antique car parts. It was painted white. I always told Dad I would like it restored someday and some years ago he took on the job of restoring it, stripping the paint and paper inside on the shelves, and gave it to me as a birthday present! It is quite old, as the shelves are supported by wires that run along the side which the shelves sit on. 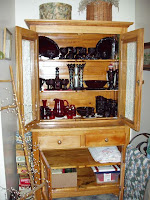 I was lucky to fit it in the back of my stationwagon to transport it across the state to my home here in Denver. (It barely fit in, with the back seats down, and helpful neighbors got it from my car and into my house.)
Displayed in it are my red dishes. Some are the Avon Cape Cod series, a red pitcher and glass set I purched at the Rejmyre Glass Factory in Sweden when I was an exchange student and other red pieces I picked up here and there. The two carnival glass vases, on the center of the center shelf, I picked up at an auction in Waverly.
Posted by Diane Johnson at 8:37 PM