Granite will celebrate it's 125th Quasquicentennial in 2012, who's making plans for the celebration? :-) I compiled and wrote the following years ago with some help, first for a sign placed in Granite and adapted it later adding more information for the book I wrote, "A West Ender's Scrapbook", finishing it in 2004. It's my heritage, close to home, and full of familiar people and places to my minds eye. Think of all the seeds spread by these early pioneers of our community.

This area, where Blood Run Creek passes on its way to the Big Sioux River, was inhabited by Native Americans between 1300 and 1750. As many as 10,000 Oneota Indians lived on the surrounding fertile prairies. There is also evidence of the Sioux inhabiting the area for some time in smaller numbers. The first European explorers and traders arrived in the area in the late 1600’s. Pioneers would follow full of courage and faith, to build dugouts and sod houses, on the 1870’s prairie and Sioux River Valley they chose to call home. 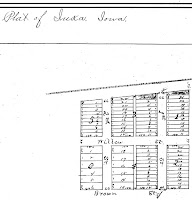 D. C. Rice surveyed and staked out blocks, lots, streets and alleys in the southwest quarter of Section 19, Township 100, Range 48 on June 12, 1886, at the request of the owners; Richard and Bessie Pettigrew and Samuel and Bell Tate. The town of Iuka was officially filed March 14, 1887.
Left: Book 1 of Town Plats of Lyon County, Iowa, pg. 384. Feb. 1887
Transportation through this area was new as stagecoach trails passed on their way to Dakota Territory. 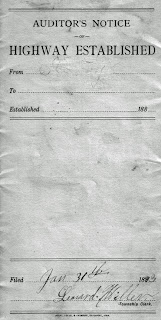 Railroads traveling west across the prairies brought the Cedar Rapids, IA, Northwestern Railway coming through in 1886, bringing the need for waterwells and tanks where they could fill their steam engines. In 1893, the Board of Supervisors established a “Granite Highway” to go through the Village of Iuka, easing the way for transportation to and from the young town.
The town name of Iuka was officially changed to Granite in late 1887. Although many documents still used Iuka, the new name of Granite appeared on state maps as early as 1895. In 1900, fifty people resided here with A. Parker serving as postmaster and shopkeeper. 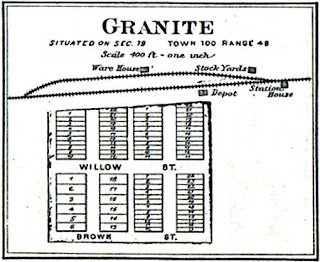 A blacksmith was vital to a community and Gust Anderson wore that title.
The railroad changed in 1903 to the Chicago, Rock Island and Pacific Railroad and had W. J. Brown serving as its agent. The Depot, on the southeast edge of town found many visitors gracing it’s doors and platform. A passenger train went west through Granite about 10 a.m. daily. People often left their horse and buggy at the depot and would go to Sioux Falls to conduct their business. There they could shop at the dime store or other stores on Phillips Avenue or maybe go to see a doctor. They made sure to be on the train when it left Sioux Falls and arrived in Granite about 3 p.m. They were the first commuters. The freight train came thru later and on the return trip they pulled several cars of meat from Morrells.
Organized baseball was played in the “ball park” that was a pasture on the north edge of town. The Granite team had competitors nearby, playing teams from area towns. In 1915 the team included players; Ralph Anderson, Melvin Anderson, Sam Bennett, Herman Grotewold, Walter Grotewold, Bill Hughes, Tom Hughes, Claire Lind, Francis Martin, Henry Parkinson, Ed Portice, Charlie Riley, and Melvin Scott. A later team included Malc Rabey, Frank Lewis, the Grotewolds, Herb Gottlob and sometimes Melvin Burns.

Left: Looking North in Granite, the white building on the left is the DeZotell grocery store and the dark middle building is the Granite Savings Bank. Years later the grocery store was turned into a hatchery and the bank and bank building were moved to Larchwood. The white building on the right is the Zimmer grocery store and post office. The silhouette of one of Granite’s two elevators is seen on the left edge of the photo and the railroad tracks for the Rock Island and Pacific Railroad are visible near the fence line. Willow Street, running east and west, and First Street, running north and south can also be seen. (Granite Threshing Bee book 1997)
James DeZotell moved into town in 1918 and started a grocery store where a sack of candy accompanied grocery orders. DeZotell’s Store was a community gathering center. On cold winter days Herbert Bjork, Pete Cox, the Swanson brothers Anton and Ed, Henry Viereck, and Clint Vosberg could be seen playing Whist, the card game of choice, around the pot bellied heater in the back. There were some hot games but when it came time to go home and milk the cows, they left as friends until the next game. He also had a gas station and later operated a “night club” in the basement of the store. Locals smile when talking about the happenings in DeZotell’s basement but some excitement came to the community as a result of it.
In 1920, J.C. Zimmer moved into town and became the new postmaster, opening a Drug Store that included a soda fountain. Area residents often found the need to “call central” where the phone operator in Granite routed their call to its destination.
A parsonage for the Grand View Swedish Evangelical Lutheran Mission Church, that was located south of town, was also a gathering place for many community members.
Two grain elevators with titles over the years such as the Farmers Mutual Elevator Co., the Sioux Elevator Co. and Skewis-Monen Elevator, operated next to the railroad tracks providing for area farmers’ needs.
Stockyards and a scale house operated by Charlie Riley, were put to use by farmers who brought their livestock to Granite. In late June of each year, preparations were begun for a special trainload of cattle to be shipped to the Chicago Union Stockyards. The railroad made a commitment to the area farmers that if a whole trainload of beef was shipped at one time, they would guarantee arrival in Chicago early Monday morning if loaded the prior Saturday afternoon. The special train had right-of-way over all other rail traffic for the incredible 36 hour trip. These shipments reached their peak shortly after World War I, and continued until the late 1920’s.

Right: The Granite Depot, next to the Rock Island railroad tracks, and the elevator office.
A Saturday night in the summer found Granite the favorite shopping and visiting place. After the eggs and cream were traded for groceries, the women folks visited from car to car while the men talked about crops and livestock, the kids played games after they got their pop and ice cream if there was money left over from the cream and egg money.
Early in the fall, DeZotell’s store started taking orders for a carload of flour. Farmers with large families ordered 25 to 30 sacks of flour. They came with a team and wagon to haul the flour home. Periodically they would move the sacks to keep the flour from spoiling. Store bought bread never tasted as good as home baked bread.
The Granite Savings Bank, chartered in 1920, had Oscar E. Holly as its first president and L.L. Penning was cashier. Original board members were T. G. Bennett, Wm. Grotewold, Oscar Holly, Lars Jensen, Nels Martin, C. T. Swanson, and Ed Swanson. In 1931, C.T. Swanson, president and R.W. Wyant, cashier, saw the Granite bank become the only bank in Lyon County to remain open through The Great Depression. 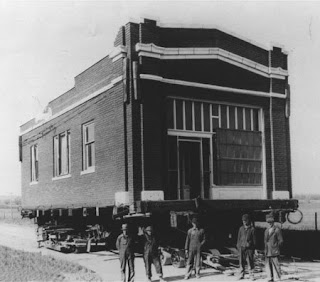 In the fall of 1934, as the small village was disappearing, the bank and bank building were moved to Larchwood by Brandt Engineering Co. of Sioux Falls. The brick building was 22 x 42 feet and moved a distance of eight and one half miles on November 19, 1934 without breaking a glass window or dislodging a brick. Now known as the Security Savings Bank, it is the oldest chartered bank in Lyon County.
Well known to the long time residents, Paul the Prophet came to Granite in the mid 1920’s. He was a drifter, walking the tracks but Jim DeZotell took him in and gave him a bed and food for doing some work around the store. He knew his Bible and in the evenings the farmers gathered around to hear him prophesy. Paul told them that dry weather was coming and the dust would blow so thick they wouldn’t be able to see the depot as they stood in the store. He also predicted the great depression. No one believed him but we got the dust bowl and many farmers went broke and moved to CA.
All of the business places are now but fading memories as the years go by. The flood of 1972 took out the railroad tracks. The last old store building to go was the DeZotell Store, purchased by Ralph Wineman, who turned it into a chicken hatchery that was in operation until 1973. A few homes and one business, Miller Loaders Inc., are what remain of Granite today.
It does thrive once again, when the town swells with people who travel from near and far to reminisce those days of long ago, during the Annual Threshing Bee in July. What once was a prosperous business and farming community is now a community full of shared memories, of those who came to this area before us and the days 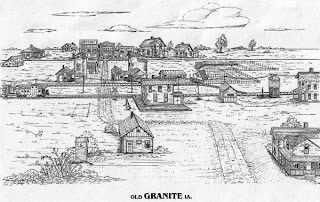 that have passed since they walked our path.
Right: A drawing by Dolly Zangger, of Larchwood, gives an overview of where the old buildings once were.

Sioux Township was set off from Larchwood in January, 1879. It is comprised of all of township 100, range 48, and so much of range 49 as is east of the Big Sioux river. Its population is 449, including the hamlet of Granite, on section 19, which has about fifty persons (1900 Census). This township is bounded on the north by South Dakota and Minnesota, on the east by Larchwood township, on the south by Centennial township and on the west by the meanderings of the Big Sioux river. A line of the Rock Island system of railway passes from east to west through its territory en route to Sioux Falls. (Compendium of History Reminiscence and Biography of Lyon County, Iowa., 1904-1905)
The 1880 Census listed people of the area under Lyon Township, Lyon County, Iowa.
Posted by Diane Johnson at 5:51 PM

It was really nice post and informative as well...:)