It’s Homecoming week at Denver. I’m a senior class sponsor so my kids are wound up for a memory making week that they have been making plans for since the first day of school this year. They choose the theme of the Olympics.

Left: One of my students, Rachael, dressed up as a cave woman, including ugly teeth.

Right: Our Family and Consumer Science teacher, Judy, has been getting into the swing of things each day. This was Theme day and she is a character from Star Wars for the Freshman class, which she is a sponsor. 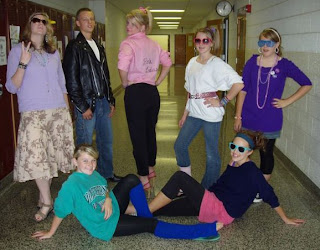 Above: Some kids in my Art 1 class on Decade Day. Some decades got a little mixed up and punk rock imitators and kids wearing leggings were declaring they were from the 70's so I had to set a few straight. They always ask which decade had the hippies? The best question I got was "Miss J., were you a hippie?"

The "end all" is to win the “Spirit Stick”. A highly coveted stick the IT teacher made on the lathe and I painted a few things on the side, MANY years ago. This years seniors won the stick last year, upsetting the class of 08. They aren’t going to let a senior class lose bragging rights again.
In Friday nights football game we play BCLUW (my college roommate Beth's kids school). Our team isn't that great this year but the kids are having fun. Making memories...
Posted by Diane Johnson at 4:33 PM