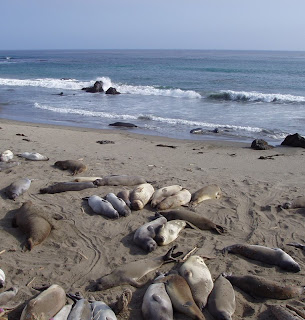 Northern Elephant Seals (Mirounga angustirostris)
Protected by the Marine Mammal Protection Act, they are expanding their range outward from remote islands and are now colonizing selected mainland beaches such as The Piedras Blancas rookery on Highway 1, seven miles north of San Simeon on the California Central Coast. 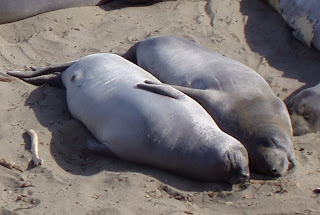 Home to about 15,000 animals, the area is open for viewing every day of the year. 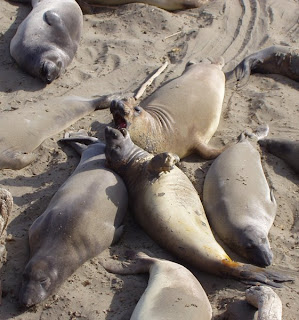 Hunted nearly to extinction for their oil-rich blubber, elephant seals have made a remarkable comeback.
Elephant seals come ashore and form colonies for only a few months of each year to give birth, breed and molt. The rest of the year the colonies disperse and individuals spend most of their time in pursuit of food, a quest which involves swimming thousands of miles and diving to great depths. 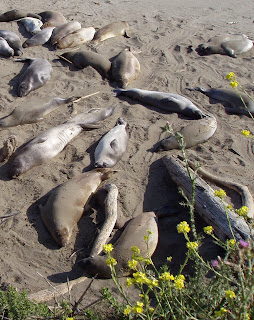 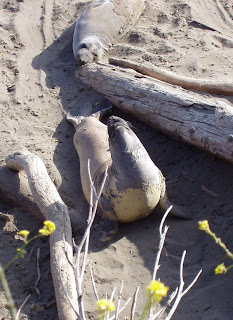 Elephant seals move by pulling with their foreflippers and heaving their bodies forward. Flipping sand onto it’s back is a common habitual behavior which helps to keep the animal cool and protected from direct sunlight. There is a tremendous difference in size and appearance between males and females. 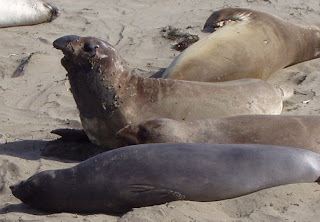 I took these photos on a cool afternoon in June of 2006.
We enjoyed watching the seals interact and move across the sand and were amazed at the speed they could move. 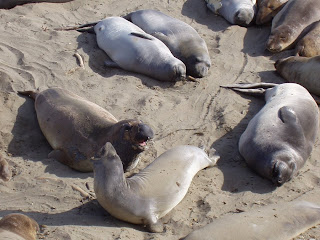 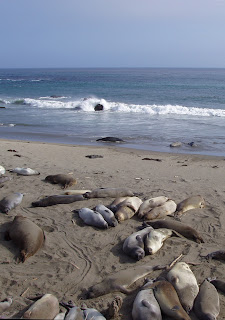 There were a few young males sparring with each other in the waves of the beach while we were there but my camera’s telephoto lens wouldn’t capture them at that distance. There was a constant moan, bark or “chatter” from some of them, one can only wonder what they were talking about.
Posted by Diane Johnson at 5:23 PM