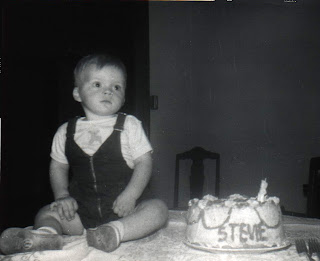 Tomorrow is my brother's birthday.
Here is a photo of Steve on his first birthday. It was common for us to be placed on the dining room table with our cake for the photo op when we were small.
Last year I was recuperating from pneumonia and happened to be on the farm when he was home for a visit, days surrounding his birthday. Dad had had artery surgery the week before so Mom had her hands full taking care of everyone, while I tried not to breathe on Steve or Dad. On Steve's birthday, Mom, Steve and I went to Sioux Falls together. We went down to the Sioux River Falls to view the falls and then went to the Washington Pavilion to see a movie about dolphins in their large domed theater. I remember they had a car outside the pavilion that was balanced so a quick pull of a rope lifted the car. I can visualize Steve going over to lift the car with little effort. I wish I had my camera with me to capture that moment but it is engraved in my memory. I didn't feel very well that day and was still weak but it was all in God's plan... I came home for Dad's surgery and to see Steve with a long weekend away from school, caught pneumonia and was down and out for a few days, staying an extra week than originally planned, and because of all those happenings, got to spend his last birthday with him and my last time with him in person. Indulge me as I share a few photos and memories through the years of Steve, I miss him... 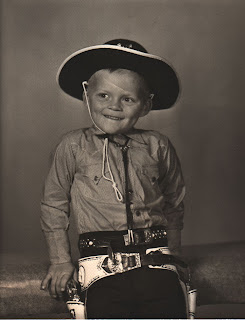 Cowboy Steve, five year old desperado. This reminds me of a time when all us kids were pretending to be the Cartwrights of Bonanza and were riding our horses by jumping on the davenport (not acceptable practice according to Mom and Dad) We had a record of the music from Bonanza and would often put the record on to "go riding" One day while riding Mom quietly walked in on us. Slowly one by one we stopped; Joe, Deb, Diane... while Steve continued at a full gallop urging the rest of us to get back on our horses,... until he saw Mom standing at the end of the couch watching. As an adult I can now imagine how difficult it was for mom not to smile and laugh at the scene she came in on. 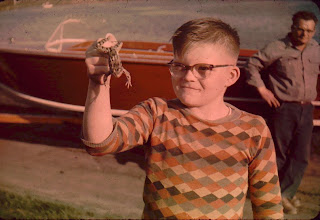 1964, At Lake Alvin across the river in SD, a few miles from church. Family friend Otto Lund had his boat there and we had a family day at the lake. Steve found a frog. He always came up with frogs and turtles, snakes and things. He even had a rock and shell collection that's on the farm somewhere. 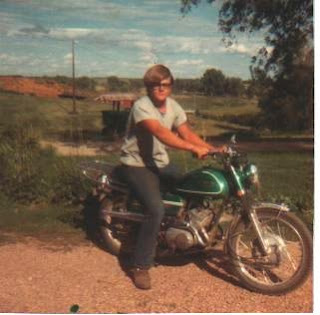 Steve and his 350 Yahama, his first bike. I remember going to watch him and other area guys race in the back fields or hill climb up Lynch's hill. It made Mom nervious so I'm sure she never knew all of what he did on the bike. A good friend, Karl, owns the bike now. 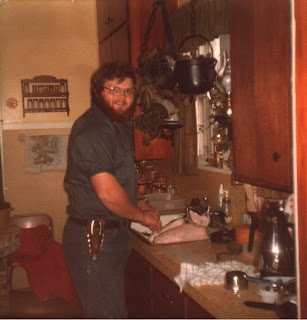 Steve and I fixed the Thanksgiving turkey back in 1977. Mom and Dad had gone up to Fairbault, MN to be with Debbie as she had hand surgery the days before and they were all due to return on Thanksgiving Day. Steve and I were supposed to get the meal prepared. It was a first for both of us. We laughed so hard cleaning out the bird it was a turkey experience we never forgot. Look at all that hair on his face and head!

Grandview Covenant Church made a church directory back in the 90's. The photographer set up in the basement of the church and did a good job getting a smile out of Steve. 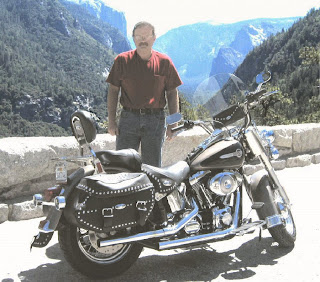 Back in 2004 with his new Harley at Yosemite. He loved riding his bike. We were glad the year before his death he got to ride it so many places. California, Yellowstone, the Continental Divide, Devils Tower, the Black Hills and the Sturgis Rally and back home in and around Larchwood. It was hard on him later when he couldn't ride safely anymore. He tipped it a few times pulling into a parking lot or driveway, they are pretty heavy bikes. He continued taking photos for his Harley group in Fresno up until October 2007. He'd drive his truck to the events and help in any way he could, that way staying close to the biking community.

At Sequoia National Park. Steve and I enjoyed walking the trails around the big trees. Steve wasn't big on having his photo taken so I had to sneak in a few and got quite good at it. This was taken at the end of the trail in 6/2006. 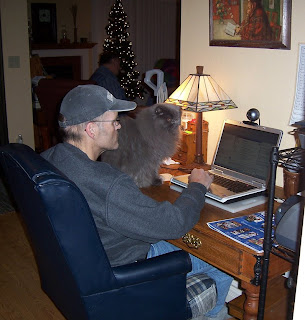 The Christmas holidays in 2006. Steve drove to AZ from CA and connected with Joe in Phoenix. They drove down to Tucson to pick up Deb and bring her back to Mesa at Mom and Dads. Here's Steve on Deb's computer with her cat, Max, looking on. Max loves the computer, especially the printer. It was the first time in many years we were all together for Christmas (and the last.) We went swimming on Christmas Day, a first for all of the Johnsons used to snow and ice on Christmas. Happy Birthday big brother.
Posted by Diane Johnson at 1:40 PM

Love the memories of your brother, Diane. It is nice to share so many fun pictures.

I loved reading about your brother. He is gone from this earth, but not from your life and your heart. You will be connected to him forever. Thanks for sharing! Carol

How blessed we are to have the gift of memories. You have shared some great ones!