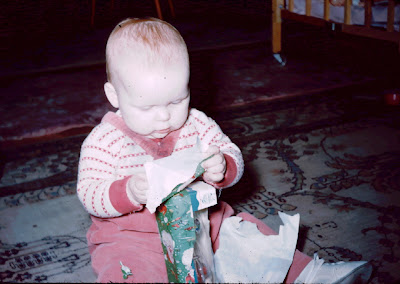 Our hearts grow tender with childhood memories and love of kindred, and we are better throughout the year for having, in spirit, become a child again at Christmas-time. ~Laura Ingalls Wilder
My first Christmas, 1958
Only four days until I'm to fly out of Waterloo to Phoenix for Christmas with my family. We've got a blizzard warning for later tonight and tomorrow as more snow comes along with winds. Snow is also forecasted for Tuesday and Wednesday, so I'm crossing my fingers that my flight takes off early Wednesday morning. It brings back to mind Christmas 2006, when my flight was canceled out of Waterloo and good friends drove me through the thick fog to Des Moines to catch another flight to Phoenix via Detroit. The problem is, if a flight gets canceled, who knows when your next opportunity to get a flight will come. 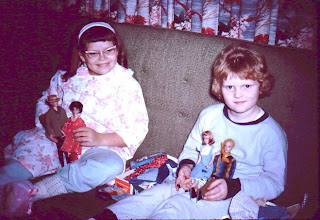 Christmas Morning 1963, Debbie and I with our Barbie and Ken dolls. Mine was actually a Midge, Barbie's best friend. My Ken had blond hair and Deb's had brown. No chances of getting our dolls mixed up. Good thinking Mom.

Yesterday we got 9.7 inches of snow here in Denver, which led to school being canceled again. I busied myself with tasks around the house and an errand or two after the snow stopped and the driveway and street was cleared.
I watched a squirrel diving into the snow. It would stand on a drift in my backyard and suddenly dive down into the snow until it would totally disappear, tail and all, most likely in search of treasures down at ground level. Too bad I didn't have a video camera. Was it hard at work or just having fun? Can the two be done at the same time? I think that answer is YES.

Posted by Diane Johnson at 7:40 AM