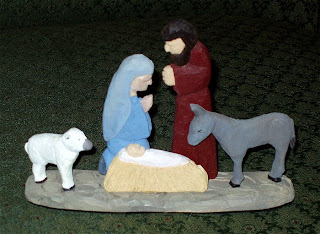 I started woodcarving in Nov. 1996, when Bill Tjaden, a retired teacher I had taught with, offered a class in his basement here in Denver. He started us new carvers out with a mini nativity scene. It's about 6" wide by 4 1/2" tall. I promptly cut off Joseph's nose when trying to carve his face, so that is glued back on. 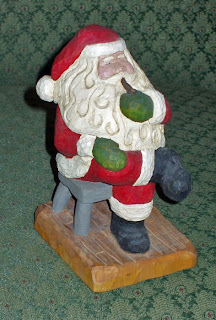 This Santa was carved in 1997. A rough cut piece made on a lathe was purchased and I finished it, adding form and details to the 6" tall piece. (I still have another "blank" like this to finish carving.) The stool area was tough to get a knife in, as well as the curls in the beard. I purchased a detail knife at this time to help with the small cuts and gouges came in handy. 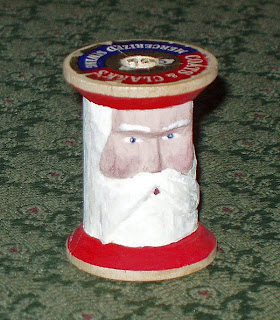 This Santa was carved in 1999, out of an old wooden spool. That detail knife I had purchased years before came in handy on the tiny details of this piece, 1 3/4" tall.

I still have many more projects to carve. I teach carving in a Crafts class at school, but don't seem to get time (or make time) to carve myself unless I'm carving with my students. I only had to have stitches once from carving, and it was at school with the kids. What a role model! We'll be carving second semester.
Posted by Diane Johnson at 5:15 PM

I continue to be impressed by your many talents! I didn't know (or did and didn't remember) that you are a wood carver. Your students really have no idea how lucky they are to have you as their teacher with so many amazing things to share, not only about art but also about life.