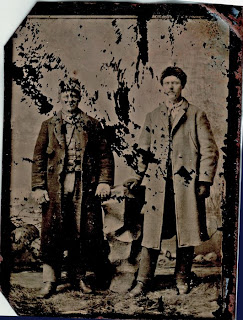 I've done a little work with restoring photos before. I was a school to work partner with a digital retouching business here in Denver a few years ago. I did some minor work for them one summer, retouching wedding photos that were sepia in color and I added color to all the flowers in the photos. It was fun to do and started me on working with some of my own photos.

Here are the before and after photos I worked with this past weekend. The tintype photo I believe to be of my Great Great Grandfather Karl August Swanson (1832-1890) and his brother in law Peter Newberg (1842-1916). The face is still too light, so I'll return to it later to continue to work on it. I cleaned up too many of the shadows on the right side of the face.

Peter emigrated to the US in 1868, and Karl and his family came in 1869. The first winter after homesteading in Dakota Territory in 1870, Karl went to work chopping wood thirty miles south of Sioux City, IA, and left his family (wife Carolina and 5 children; ages 8, 5, 2, and twin infants born in Aug 1870, one of the infants died before reaching his first birthday) with half a sack of flour and a little corn. They used corn soup to live on. The earth from the sod had sunk down from the roof and Indians would come peering down into the dugout. Carolina kept an ax beside her bed. The Indians never hurt them. In the spring Karl walked home about 80 miles from Sioux City. It would take a week to go to Sioux City, to get provisions. There were two homesteads on the way, the one sod house built over the line of two quarters of land, and each homesteader sleeping in his end of the sod house. I wonder if Peter Newberg also worked with Karl in Sioux City and if maybe this is when they had their photo taken.

I teach my students to retouch photos with Adobe Photoshop at school so the more I practice the easier it is to teach. I used the program Adobe Photoshop Elements to do these photos.

*UPDATE NOTE - Relatives, I did update my Ahnentafel a little, a few more names and information.
Posted by Diane Johnson at 4:52 PM