When I wondered what to post today, and how to link it to yesterdays post, I've taken the easy route and am posting a photo I recently scanned into my collection below. Photography is the connection.
Back in 1978, my sister Deb and I purchased an Amtrack railpass. It was extremely cheep and a very economical way to travel. We had open access to any amtrack train across the US, Canada and Mexico and four of us took off on our 15 day adventure. The four of us would spilt and go our own ways, but we'd meet up again and again. We found this to be true of many of the people on the trains, getting to know people on one train and then seeing them again in a completely different location.
We each had one bag (This was before rollers on luggage) to stuff our belongings into and started our vagabond life for the next two weeks. Sleeping on trains and catching naps in train stations, washing our hair in sinks in the terminal, but we also planned a few stops with friends in certain locations and got motel rooms in three cities. I recently found a journal I kept from the trip so I can bore you with more details than my memory would allow.
Our path took us from Minnesota to Chicago where we got off the trail and explored a day, going to the Art Institute before getting back on the "Lake Shore Limited" heading for Albany, NY. We purchased individual berths for an additional price, but it was nothing like the spacious rooms on the train in Hitchcock's, North by Northwest, I remember a seat that folded into a bed with a toilet next to your face as you laid down. Needless to say that was the only time we paid extra for that "luxury".
We switched trains at Albany and got onto the "Adirondack" heading to Montreal, Canada to visit an old roommate of Debs. From Montreal we came back down through New York to Wilmington, Delaware where Deb had friends again. Next stop was Washington, D.C. and Union Station. We had a day there so chose one of the Smithsonian buildings as well as views of the Capitol and Mall area. We boarded the "Southern Crescent" train and upon leaving D.C. we went right by the Jefferson Memorial and got a rather quick close up view.
Atlanta found our group reconnecting as we headed to New Orleans and our first motel room. No ofence to anyone but here is an excerpt from my journal "There are 35,000 Jehovah’s Witnesses in town and we get witnessed to on every corner, building and elevator. They have yellow sacks with their literature, so you know when they appear to be approaching to witness. We thought it was pretty humorous when we found some yellow bags in a trash can to carry, so they wouldn’t “bother” us." I guess you could say I've been a resourceful person for quite some time... :-)
We boarded the "Sunset Limited" where one of the guys in our group played his guitar in the lounge. Musicians would join in and it was a beautiful way of connecting with people across the land. Some trains had glassed top cars so at night you could watch the sun set or view the stars with music and singing. That was probably my most special memory of riding trains.
In the West Texas desert, 150 miles east of El Paso we collided with an automobile. Deb and I were in the accordian space between two railcars when we felt the jolt and immediately smelled the gas. When we got back to our seat a woman was screaming and crying, she had been looking out the window and saw the car after the impact. The accident killed a woman and left a husband and two children in critical condition. We stayed there awaiting a helicoptor, authorities and repairs. It was an emotional time for us all and the crippled train was now without any refridgeration or airconditioning in the desert. They allowed people down to the baggage area where they opened the large top part of the door to admit fresh air. The silver train was so hot going across the desert it was a sauna of rotting food and sweating people. I remember how cool it felt when we arrived in El Paso and were able to stand in the shade of trees in the 105 degree heat and feel refreshed while repairs were made.
On to Tucson where our guitar playing friend left for Mexico (Mom and Dad had asked that we not go to Mexico as at that time there were some young girls who had gotten jailed there and although many had tried to help free them they were caught in the system of another country.) and the rest of us headed for LA and Oceanside, CA for a few days of rest and relaxation and of course the ocean and Disneyland.
Up the coast to San Francisco, the view of the coastal scenery was beautiful. Cable cars, Fishermans Wharf, views of Alcatraz, Chinatown, filled our days here. Deb and I dressed in old clothes for a tourist spot photographer in San Francisco. The only thing I remember about having our photo taken is that my dress was purple polyester and I thought that was unrealistic for an old fashioned picture, but the photographer said with the sepia tones no one would ever know. Well, now you all do. 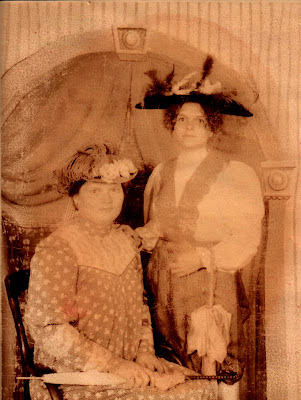 Leaving San Francisco/Oakland we traveled north to Portland, Oregon, Puget Sound at Olympia, WA and the beautiful scenery again all the way to Seattle where we stayed with friends of someone in the foursome. We went on a tour of underground Old Seattle where I learned the trivia answer to "who was the inventor of the flush toilet?" (Sir Thomas Crapper) On to the top of the Seattle Space Needle - 700 feet in 43 seconds.
Our last train to ride was the "North Coast Hiawatha", more beautiful scenery through Idaho and Montana and a quick stop at Livingston, the gateway to Yellowstone Park from the north. We encountered a storm on our last night on the train. We later found out Minneapolis was badly flooded with 6 inches of rain that came down in 1/2 an hour so traveling was slow as tracks were washed out in places. Deb and I leave the group at Red Wing, MN where our parents picked us up.
That was 30 years ago this summer... oh to be young and carefree again.
Posted by Diane Johnson at 5:10 PM