I found a couple more early photos of Charley and Anna Swanson's house. The kitchen/pantry were on the right side of this photo and the parlor was on the left with the smaller step entrance. I wonder why the steps were different widths on each side?
The top photo shows three children, so from their appeared ages I would guess this was taken in 1901/02. The youngest child would be my Grandmother Phoebe Carolina born, Jan. 19, 1900. 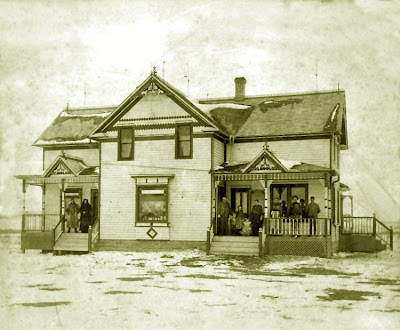 The bottom photo was taken in the winter of 1903/04 because Grandma Anna is holding baby Elmer, born May 10, 1903. On the far right is Aunt Tilda Swanson, I believe holding Lawrence, who was born Nov. 24, 1903. Uncle August is standing behind Aunt Tilda. I wish I could identify everyone in the photos, here's an attempt. Front row: ? Mable, Emil, Charley, Phoebe, Anna, Elmer Swanson, ?, ?, ?, Tilda Swanson, Lawrence. Row two: ?, ?, ?, ?, Adolph Swanson, August Swanson. I don't know anyone for sure behind the front two rows, I imagine lots of Swedes! Great-great Grandmas Greta and Carolina Swanson are probably two of the older women in the front row. Remember you can click on the photo to see an enlarged version. 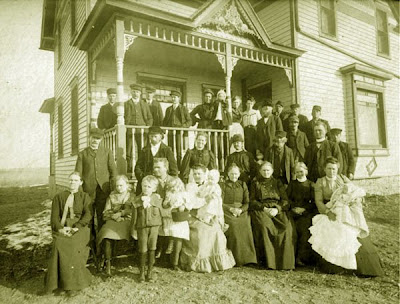 Posted by Diane Johnson at 8:26 AM