More on the ship Orlando 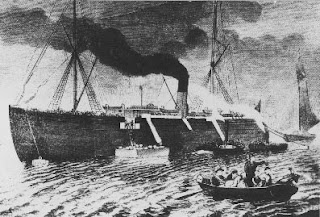 The "Orlando" of 1876 was a 1,473 gross ton ship, built by C & W. Earle, Hull, England for Thos. Wilson, Sons & Co. of Hull England. Her details were - length 260.4 ft x beam 32.2 ft, one funnel, two masts, accommodation for 44-1st, 36-2nd and a considerable number of steerage class passengers. Launched in Dec. 1869 and used on the Baltic and North Sea routes and Hull where passengers could board a train direct to Liverpool for transatlantic steamers. She was lengthened to 274 ft, 1,610 gross tons in 1878 and re-engined in 1897. Sold to French owner Paul Castanie, of Oran in 1909 and renamed "Algerie", again renamed "Dzezair" in 1913, and sold to J. Avranitidi, Constantinople in 1914 and named "Velissarios". In March 1914 she was laid up at Constantinople and in Nov.1914 was inspected by German and Turkish Naval officers for possible use as a transport, but rejected as being in too poor a condition. In 1916 she was taken up by the Turkish navy due to heavy losses of Turkish ships and placed under the management of Osmanli SS Co. Renamed "Umit" she was again laid up in 1919 until 1922 when she was used as an army transport in the Black Sea. In 1923 she was sold to Turkish owners and renamed "Umid", and on 17th Mar. 1924 was wrecked on the breakwater at Carodia while on passage to Crete to rescue Turkish refugees.[Wilson Line by John Harrower] Wilson Line did run a service from Hull to New York from 1875 and from 1896 in conjunction with the Furness-Leyland Line from London. They were never very successful as a transatlantic passenger company and ceased this service in 1916. Their ships used on the Hull - Southampton - New York service in 1876 were:- Othello, Virago, Columbo, Navarino, and Hindoo.- [Posted to The ShipsList by Ted Finch - 17 October 1998]

Wow....you really ARE into history and geneology! You have done some major research! Love, Carol