Mom and Dad are here visiting. We went to an auction last night and laughed when all we wanted was one item and the auctioneer would put a bunch of junk with it. Of course that happened more often than not, so I kept on making trips with our treasures out to my car from the 4-H building where the auction was. We came home and laid the "loot" out across the living room trying to decide what we wanted to keep and what was on to “another owner”. Thank goodness we’ve stayed true to our original thoughts and the “another owner” pile is growing.
Today, I had a dentist appointment and then I took them to the casino in Waterloo for the noon buffet and the opportunity to throw some money away. Mom broke even, Dad and I lost under $10 so it wasn’t too bad and we found ourselves entertained for a while. 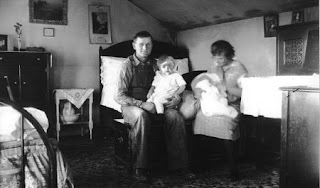 It's tough to see them loose their stamina, even tougher on them to realize they can't do what they used to or want to do. (I'm feeling that too! ohhh the aching knees and ankle) Although their bodies are aging, the folks are still young at heart.
Picturing your parents as kids is always amusing and eye opening. I've been smart enough to question the heck out of them on different subjects pertaining to their youth. Good idea huh? Hopefully you'll ask those questions of someone special before it's too late. 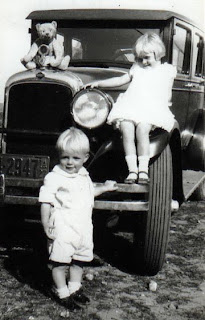 Dad’s parents were living in a small white two room abode waiting for their new house to be finished when he was born. (This little home later became a chicken house and then storage for old car parts and a cat house.) The only photo we have of the inside when they lived there is the photo above where Grandma is holding infant Calvin and Grandpa Joe is holding Joyce. (Nov. 1925) When Dad was about 3 wks. old they moved into the large new house just a few yards south of the "chicken house". The same place I was raised and Dad has called home all his life. Here's a photo of Calvin and his sister Joyce showing Dad's early love of old cars (1927).

Mom was born in Sioux Falls, and adopted at 2 ½ yrs. old by Adolph and Celia Wettestad of Colton, SD where Grandpa Wettestad was manager of the elevator there. They moved to Faulkton, SD, and Primghar, IA, before moving to Brookings, SD, in 1935, always working managing elevators. Mom’s Dad passed away from a heart attack in 1939. Celia and Darlene moved to Sioux Falls for a while in 1940-41. 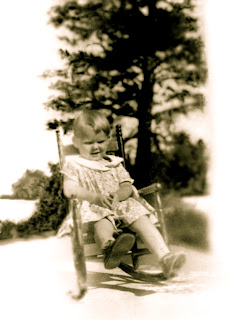 Two different upbringings, Dad has been on the same location all his life except for his time in the service and Mom moved quite a bit in the years before she met Dad.
I don’t have many of their childhood photos scanned, or available here in Denver, but here are a couple shots of them as youngsters.

It’s nap time now for this crowd… all kids need to rest.
Posted by Diane Johnson at 3:45 PM