Fallhemmet was the home built by my Great Great Grandfathers Karl and Adolph Swanson in the woods behind Brohemmet in Sweden. I had posted a photo I had created digitally earlier but found these notes I forgot about and thought I should share with the relatives checking in.

Henry Lundström, grew up in a place called Gunnarstorp, in Ljung parish, and as a child and teenager he used to walk around a lot in the neighbouring woods and he said he recognized the house very well. (by the photo of Fallhemmet) He also remembered that he had been inside the house. It was then empty, no one lived there. He remembered that the walls were covered with old papers and of course he could not stop himself from tearing down some of these newspapers and behind some of them he found letters from America, Must have been sent by your relatives, don't you think? One could 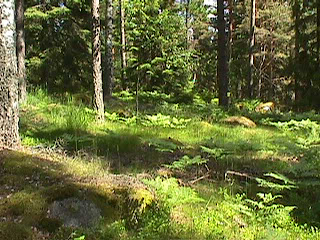 We visited the site in 2001 and there was an apple tree and two cherry trees along with remains of a cellar but because of the thick moss everywhere it was tough to see exactly where the buildings were.
Posted by Diane Johnson at 9:46 PM