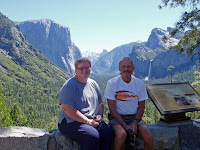 My brother, Steve, passed away from gastric cancer on December 19, 2007. When he moved to Fresno, CA in 2003, he found a love for the three National Parks near Fresno; Kings Canyon, Sequoia and Yosemite. When he first moved to the area, he would drive to Yosemite and hike the different trails, explore the history of the area and soak in the nature that was so unlike the plains of Iowa where he grew up.
Whenever family or friends came to the area, Steve was sure to take them to one or all of the parks. When I went out to be with him for his surgery to remove his stomach, back in 2005, he kept on suggesting to my sister Deb and I to take an afternoon trip to one of the parks since I had not been there before. Of course we wouldn't hear anything of it, as we were there to give him support and sightseeing wasn't a consideration. All he was going through, he still had a love and pride for the nature around him.
When I went back out for a visit the next summer, Steve was eager to take me to the parks and I looked forward to the trips. We photographed the area, exploring what could be our best shots, got excited when thunder clouds crept into the valley at Kings Canyon making the view incredible, we got interested in the variety of bark textures on the trees and how the elements gave each one it's own identity, and of course all the waterfalls in Yosemite gave us pause for reflection.
I wanted to paint a scene of Yosemite for Steve and gave him this painting for Christmas in 2006. 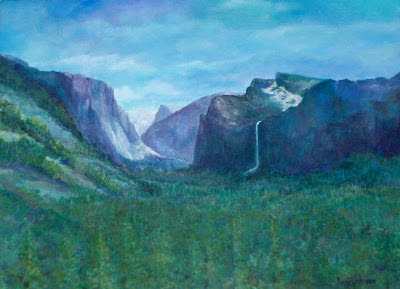 Because Yosemite was "heaven on earth" to Steve it has become special to our whole family. We all have had our photo taken at this view. If Steve's spirit is traveling this earth, I imagine he has finally soared to the top of half dome (He had wanted to hike to the top, but never got the chance before his cancer was found.), the peak is in the center, off in the distance of the scene above. 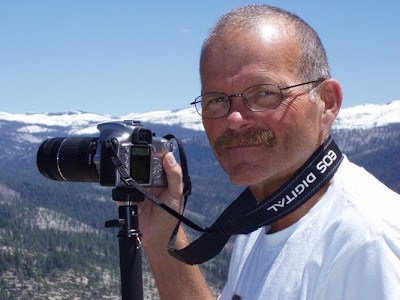 We treasure the photos he took on his many adventures. I'm sure I will post some of them in the weeks and months ahead. I'm now the caretaker of his camera in the photo above, may the viewfinder point it's way to the wonders God has placed before us.

Posted by Diane Johnson at 4:11 PM