Get Your Feet Wet 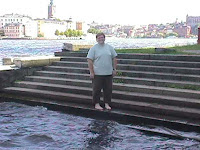 If you get your feet wet, you gain your first experience of something. How many new experiences pass us by as not relevant or noteworthy.

Here I am putting my feet in the Baltic Sea on the grounds of the City Hall in Stockholm. The Baltic Sea is part of the North Atlantic Ocean but the water of the Baltic has a very low salt content, only about 1/5th of that in the oceans. Over 30% of the city of Stockholm is made up of waterways, the Venice of the North. Robin, my cousin was a little braver. 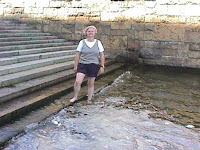 The City Hall is probably best known as the location of the yearly Nobel Banquet. I however remember it for the breathtaking view of Old Stockholm from the tower. I’ve been to the top of the tower twice. When we went in 2001 I told my group of the must see view I had seen over 25 years before. What I didn’t remember was the details of the trip to the top. I remembered the elevator, but forgot that the elevator only went halfway up the tower. Robin led the way, I was second, and poor Mom and Joyce brought up the rear. Both having had both knees replaced we sympathized as the passage seemed to go on and on as it circled at an incline around the tower with steps at each corner of the building.

Robin and I laughed at our groups plight, as I would drop back to check on “the Moms” progress. Once we got to the top there was an open staircase to get to the really good view 106 meters into the air, more laughter. Not a trip for anyone scared of heights. 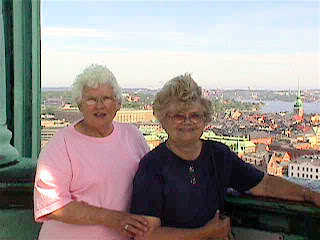 You may not be scaling the Stockholm City Hall tower but I hope you have many chances to “get your feet wet”. 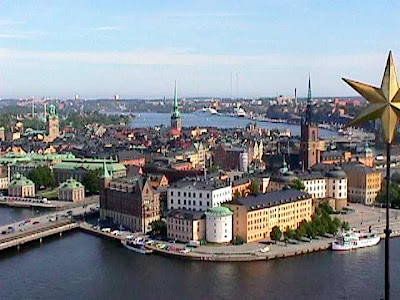 If I remember right, we got our feet wet quite a bit on that trip (Think it was a Swedish or Joyce thing that caught on).
I can't believe how cool your blog is. I'm going to give it a try, but I'll never keep it up this well. You're awesome!
Robin